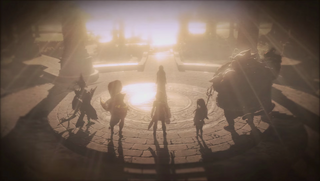 Link
Revali
Daruk
Mipha
Urbosa
The Champions,[name reference needed] also known as the Four Champions,[1] are a team of five chosen from the five races of Hyrule to battle against Calamity Ganon. Led by Princess Zelda with the Champion hero chosen by the sword that seals the darkness at her side, the other four Champions were tasked with piloting the Divine Beasts and providing back-up as Link and Zelda face the Calamity head-on in an attempted to seal it away.

10,000 years ago, the Sheikah constructed the divine beasts to combat the calamity. Four unknown individuals were chosen to pilot them[2]. Together with the guardians, the hero and the princess, the four champions and their divine beasts were successful in sealing away the calamity, if only temporarily. They are never seen in-game; the only time they appear is on an ancient tapestry and when Impa tells Link the tale of 10-millennia prior. It is not known whether their races correspond with the races of the current champions.

After the Divine Beasts and Guardians are unearthed and the plot to defeat Calamity Ganon was created, the Royal Family of Hyrule choose a representative from each of Hyrule's races, with Princess Zelda personally approaching each of the four Champions to ask for their help. They are joined with the Hero chosen by the Master Sword to protect the Princess and together face the Calamity. The four Champions overcome trials to prove themselves worthy of piloting the Divine Beasts.[3] After a suggestion from Daruk,[4] the Champions attend an official ceremony and watch as Princess Zelda declares Link the Hero of Hyrule.[5] Though Daruk notes that Zelda is treating the ceremony as if they had already lost and Revali complains that the ceremonial grandeur is overkill,[6][7] Urbosa speculates that Zelda may see Link as the embodiment of her own failures.[8] Following the ceremony, Zelda continues research on the Divine Beasts and the Ancient Shrines so that the Champions will be better able to face Calamity Ganon.[9][10][11] However, she is ordered by her father, King Rhoam, to cease wasting time on these studies and focus on her attempts to awaken her sealing power.[12] Zelda begins her own ceremonies at the Springs of Courage, Power, and Wisdom,[13] finding herself increasingly frustrated when she feels none of the sealing power she is expected to use within her, but still holds onto the hope of success.[14] As she and Link descend Mount Lanayru at the end of her third failure at the Spring of Wisdom,[15] the Champions are there to ask how it went.[16] Though Mipha begins to offer a recommendation from her own experience in using magic,[17] they are interrupted when Calamity Ganon surfaces.[18] Sprung into action, Daruk directs the other Champions to their Divine Beasts and tells Link to get ready to battle.[19] Though Urbosa attempts to escort her to safety,[20] Zelda insists that they include her in the fight.[21] However, it all backfires when Calamity Ganon possesses the Guardians and Divine Beasts, sealing Daruk, Mipha, Revali, and Urbosa inside and attacking the kingdom.[22] Link and Zelda flee to a forest and Zelda breaks into tears over their failure.[23]As they near Fort Hateno, Link's injuries start to get the better of him as Zelda begs him to save himself and leave her.[24] Her attempts to protect him cause her to accidentally awaken her sealing power, deactivating all of the Guardians in the area.[25] However, she finds she is too late as she sees Link has collapsed and attempts to encourage him as he falls unconscious.[26] She is momentarily heartbroken, though a voice within the Master Sword encourages her that it is not too late to save him.[27] She orders two arriving Sheikah to have Link placed in the Shrine of Resurrection, where he will be healed.[28] Zelda, filled with hope, takes the Master Sword to the Korok Forest and places it under the watchful eye of the Great Deku Tree, assuring it that its master will one day return.[29] She then sets off to Hyrule Castle to do her best to keep the Calamity sealed until that day comes.[30]

One hundred years later, Link is awakened by the sound of Zelda's voice. Directed by Zelda, Impa, and the spirit of King Rhoam, Link sets off to enter the Divine Beasts and free them from Ganon's control, and in the process, free the spirits of the Champions. Should he do this successfully, the Divine Beasts fire upon Calamity Ganon during the final battle, dealing high damage and taking off up to half of its health. After Calamity Ganon is defeated, the spirits of the Champions and Rhoam watch Zelda and Link leave the castle before vanishing.