Zelda Wiki
Register
Don't have an account?
Sign In
Advertisement
in: Songs, Songs in Breath of the Wild

Not to be confused with The Ceremonial Song. 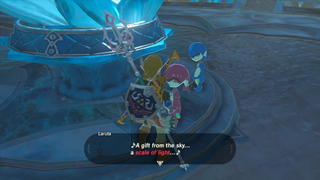 The Champion Festival Song is taught to Link by Laruta. She is seen singing it by Mipha's statue.[3][4] If Link allows her, Laruta will sing the entire Song to him.[1] When the conversation ends, the Shrine Quest "The Ceremonial Song" is unlocked.

The lyrics hint how the Shrine Quest can be completed: the "scale of light" refers to the Ceremonial Trident, "Splits the feet of a Veiled Falls sight" indicates that Link must jump from the top of Veiled Falls and plunge the Ceremonial Trident into the pedestal of the Ancient Shrine below it, represented by "Your trial awaits, it's glowing bright."