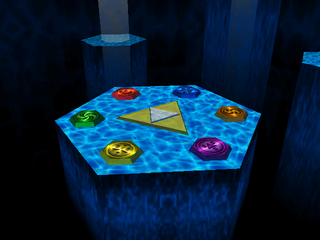 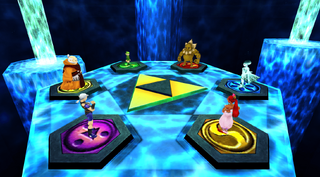 The Chamber of Sages is a location in Ocarina of Time.[1]

The Chamber of Sages is where the Sages meet.

After Link withdraws the Master Sword from the Pedestal of Time, his spirit is sealed away in the Chamber of Sages due to him being too young to bear the title of the "Hero of Time".[2] Since Link's action opened the gate to the Sacred Realm, Ganondorf took this opportunity to gain access to the Sacred Realm, eventually reaching the Temple of Light and taking the Triforce for himself.[3] While the Sacred Realm transformed into the Dark World,[4] Rauru used his powers to keep the Chamber of Sages intact.[5]

Seven years pass, and Rauru, the Sage of Light, awakens Link in the Chamber of Sages now that he is old enough to be considered the Hero of Time.[2] Rauru explains Link's fate and grants him the Light Medallion to add to his power, sending off the young hero to awaken the other five Sages so that they may add their might to Link and aid him on his quest to save Hyrule from Ganondorf's rule.[6]

Though Link is not able to visit the Temple of Light on his own, he is always warped to the Chamber of Sages every time he awakens a Sage. Here, the Sage bestows their powers to Link in form of a Medallion before returning to Hyrule again.

At the end of the game, after Link gives the final strike to Ganon and Princess Zelda calls upon the power of the Sages to seal Ganondorf away, Rauru and the other five Sages appear inside the Chamber of Sages to send the King of Evil into the void of the Evil Realm.[7]