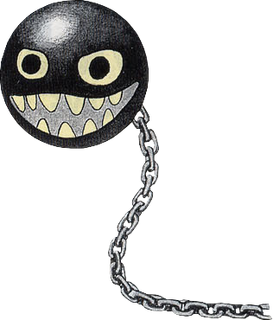 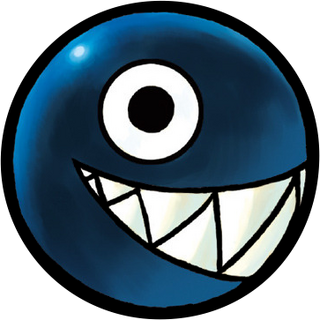 None
Chain Chomps are recurring enemies and Animals in The Legend of Zelda series.[1] They are dog-like creatures in the shape of an iron ball with fangs, usually attached to a chain to keep them from charging, hence their name. They are directly based on the Chain Chomp enemies of the Mario series.

Chain Chomps are commonly depicted as being chained to a post, limiting their movement when they attempt to lunge at Link. In all of their appearances, they are invincible enemies that have no means of being defeated.

In Four Swords, they appear as a usable item, but remain hostile towards other Links.

In Link's Awakening, Chain Chomps are docile Animals. Three of them are kept as pets by Madam MeowMeow in Mabe Village. Two of her Chain Chomps are small, with one kept indoors and another, named YipYip, inside the doghouse next to her house.

One of the Chain Chomps, named BowWow, is is much larger than the others and chained in her front yard.[2][3] Like the Chain Chomps of A Link to the Past, BowWow charges about in the front yard, but is completely harmless to Link. After completing the Tail Cave dungeon, a pair of boys inform Link that BowWow has been kidnapped by a gang of Moblins.[4][5] Link finds him chained in the Moblin Cave at Tal Tal Heights, where he defeats King Moblin and rescues BowWow.[6] Once rescued, BowWow becomes a temporary "item" as he accompanies Link; he will randomly lunge at enemies and eat them whole - including the otherwise-impenetrable Goponga Flowers blocking the entrance to the second dungeon, Bottle Grotto.[7] If Link brings BowWow back to Madam MeowMeow, she asks him to take her pet on a walk,[8] permitting him to use BowWow to clear the entrance to the Bottle Grotto. Although BowWow can eat most enemies for Link, he cannot be taken into dungeons and will wait outside. While BowWow accompanies Link, he will also inform him where hidden Secret Seashells are buried by pouncing at the spot and telling Link to dig with the Shovel.[9]

After Link clears Bottle Grotto, he must return BowWow to his owner. Madam MeowMeow thanks Link for his assistance and rewards him with a kiss. If Link tries to take BowWow with him further into his quest, he will be stopped by Prince Richard, demanding that BowWow be left outside.[10] If Link takes BowWow with him to see Kiki the monkey, Kiki will become enraged and try to battle BowWow.[11] In Link's Awakening DX, a picture can be taken with BowWow once he is returned. In the photo shoot, BowWow gets angry at Link for standing too close and charges at him just as the photo is taken.

YipYip can be found in the doghouse next to Madam MeowMeow's house. It is capable of talking. This Chain Chomp has a strong obsession with jewelry and other such accessories, and desires to have more of them.[12] It plays a role in the Trading Quest; if Link gives it the Ribbon, he will receive a can of Dog Food in return.[13]

In Four Swords, a Chain Chomp,[14] known as BowWow in the original version,[15] can occasionally be obtained as an usable item in Vaati's Palace. When used, the Chain Chomp appears tethered to a chain that the Link who has it carries. Like BowWow from Link's Awakening, it lunges at and eats enemies whole within its reach, and is able to attack enemies that the Links otherwise cannot get to. It is, however, also hostile towards the other Links and will attack them as well if nearby. Much like actual enemies, Rupees will spill out each time the other Links are attacked by it. The Chain Chomp can be put away by pressing the item's button again.

In Four Swords Anniversary Edition, a Chain Chomp can be found as one of the items in the Realm of Memories during the Goponga Swamp section of the Link's Awakening area. It is necessary to attack a lone Octorok that is outside of the Links' reach, in order to reveal a chest containing a Key.

In Four Swords Adventures, a lone Chain Chomp appears in Kakariko Village, north of the settlement in a burning field. As with A Link to the Past, it is an indestructible obstacle that is chained to a post and charges at the Links.

In Hyrule Warriors, a Chain Chomp is used, instead of the Ball and Chain, with the Power Gloves, the Level 3 variant of the Gauntlets Weapon. When Link uses his weapon's Special Attack, the Chain Chomp bites down into the earth.

In Hyrule Warriors Legends and Hyrule Warriors: Definitive Edition, a red Chain Chomp is used with the Burning Gloves, the Level 4+ variant of the Gauntlets Weapon.