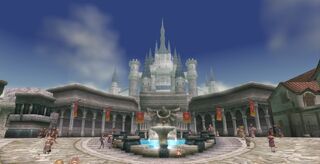 The Castle Town Central Square is the busiest section of Hyrule Castle Town in Twilight Princess. A fountain bearing the Hylian Crest rests in the middle, while a cafe bar can be found in the west portion of the Square. Near the cafe is an entrance to the viewing platform, where Link can view the entire Central Square as well as buy a variety of wares from Gorons.[3] Some musicians are situated near the entrance to Hyrule Castle, and farther back is a young Hylian, Soal, who will polish Link's shoes for just 10 Rupees, thus allowing the young hero to enter Chudley's Fine Goods and Fancy Trinkets Emporium.[4]

The cafe bar is one of Castle Town's oldest shops, so most of its customers are regulars.[5] The cafe bar does not play an important role in Link's journey, but he can visit the cafe bar to hear the latest gossip from its customer.[5] The customers at the cafe will also advise Link on which places to visit, such as the viewing platform to the side of the cafe or Fanadi's Palace.[6][7]

The Central Square is located at the center of the Hyrule Castle Town Ruins in Hyrule Field in Breath of the Wild. It was once a place for rest, but became the starting grounds of the Guardians' rampage across Hyrule at the advent of the second Great Calamity.[8] The ruins of a large stone fountain featuring three large birds sits in the middle, marking the center of the Square and the surrounding Town Ruins.

A Korok Seed is given to Link for finishing a race that begins along the southern wall of the Hyrule Castle Town Ruins and ends just above the decimated fountain.