Not to be confused with the Central Tower Region. 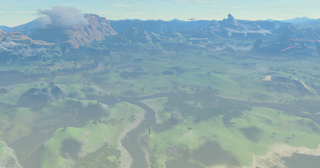 It is known, during the time of Calamity Ganon, as one of the most dangerous Regions in Hyrule Kingdom, due to vast amounts of Guardians being present there and myriad monsters, such as Bokoblins.

The Great Hyrule Forest is a large wooded area that covers the vast majority of northern Central Hyrule,[3] consisting of smaller woods that together make up the entire area. The Lost Woods is the largest of all its forests, which surrounds the Korok Forest in its core, and is itself surrounded by a deep gorge known as Lake Mekar. The Great Hyrule Forest further extends north toward the Eldin Mountains, ending at the isolated Thyphlo Ruins.

The Great Plateau, in the southwest part of Central Hyrule, is the subregion of said area where Link begins his quest and leaves to journey the rest of Hyrule Kingdom.

Hyrule Field is the subregion making up the majority of Central Hyrule, and a good amount of Hyrule Kingdom in general. It contains many monsters and Guardians, as well as Hyrule Castle.

Hyrule Ridge, in the northwest part of Central Hyrule, is a subregion with a rockier terrain and higher elevated areas, with the the major part of it consisting of the Thundra Plateau.