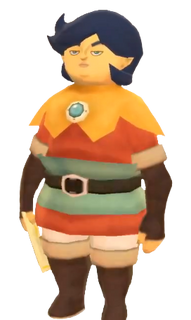 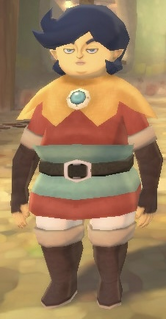 Cawlin is a character in Skyward Sword.[2]

Cawlin is a student at the Knight Academy. He is a friend and henchman to Link's personal rival, Groose. He, Groose, and Strich all have a reputation for being bullies. He rides a brown Loftwing.

Cawlin is first seen talking with Groose and Strich about how they caught Link's Crimson Loftwing in their trap. Link overhears them, and Groose proceeds to taunt and berate him until Zelda arrives, distracting Groose as he becomes infatuated with her. Cawlin is also one of the four participants in the Wing Ceremony.

Cawlin has a crush on Karane and eventually asks Link to deliver a love Letter he wrote to her.[3][4] However, Link has a choice between delivering the Letter to Karane or to Phoeni, who appears in the Knight Academy's restroom at night. Doing either will result in Link receiving five Gratitude Crystals.

If Link chooses to deliver the Letter to Phoeni,[5] much to Cawlin's chagrin,[6] she will read the Letter and end up falling in love with Cawlin.[7] Phoeni will thereafter affectionately stroke his hair while he sleeps, and he will be plagued with nightmares.[8] If Link delivers the letter to Karane, however, she rejects Cawlin,[9] and in an ironic turn of events will end up entering a relationship with Pipit, who only realized he loved her after hearing she received a love Letter from someone else.[10] This causes Cawlin to run away crying, and he can be found wallowing in despair in Groose's room thereafter.[11]

Cawlin's name is likely derived from "caw", onomatopoeia of the sound crows make.