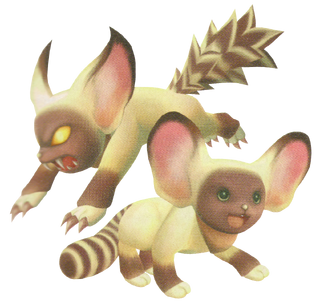 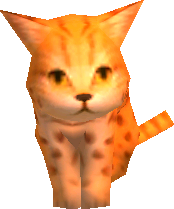 Cats are recurring Animals in The Legend of Zelda series.[1] They commonly appear in towns or other populated areas.

In Oracle of Seasons, a Mittens named Mittens plays a part in the Trading Quest, where Link must lure her down from a Tree with a Fish. In return, Link will get the Megaphone from her owner, the Old Man.

Cats in The Minish Cap will attack Link while he is Minish-sized. They are most prevalent around Hyrule Town.

In Twilight Princess, many Cats appear throughout Kingdom of Hyrule. Cats will pounce and attack nearby Cuccos. A Cat is owned by Sera in Ordon Village and is named after Link.[citation needed] In order to buy the Slingshot from Sera's Sundries, Link must catch a Fish for Link the Cat. This is due to the Cat running away after being scolded for eating a Fish intended for the family's dinner.[2] Sera, exhausted from worry, is unable to run her shop while her Cat was missing.[3] After a Fish is given to Link the Cat, he returns to Sera's Sundries, allowing Link to shop at Sera's Sundries again.

A group of Cats gather around Jovani's house in Hyrule Castle Town that can be seen playing with balls. The leader of these Cats is Jovani's Cat, Gengle. When Jovani sold his soul to a Poe and turned into gold, Gengle was also cursed and turned to gold, petrifying him to his owner's head.[4] Collecting the Poe Souls of 20 or more Poes will free Gengle from his curse.[5] After being freed from the curse, Gengle thanks Wolf Link and then ponders what Jovani is going to do with his money.[6]

Louise, a Cat owned by Telma in Hyrule Castle Town, assists Wolf Link on multiple occasions. After Zant attacks Link and Midna and steals the Fused Shadows, Link searches for a way to take the injured Midna to Princess Zelda. Louise helps Link by showing him a way through the Castle Town Sewers.[7] While trying to restore Ilia's memory, Link retraces Ilia's steps and learns about a Wooden Statue she had while in the care of Dr. Borville. After confronting Dr. Borville, he tells Link that the Wooden Statue was stolen after he spilled medicine on it.[8] Following the Medicine Scent, Link learns that it was Louise that stole the Wooden Statue, but lost it to a group of Stalhounds.[9]

In the Hidden Village, twenty Cats return to the village after Link defeats the Bulblins occupying it. The Cucco Leader who looks after the Cats asks Wolf Link to play Cat Hunt by speaking to each one of them.[10] However, it warns him that the Cats are very forgetful and will need to be spoken to all over again if Link leaves the Hidden Village.[11] Link is given a Piece of Heart after successfully talking to all 20 Cats.

In Skyward Sword, Cat-like creatures called Remlits roam Skyloft. At night, Remlits become aggressive enemies and will seek to harm Link. A particular Remlit named Mia belongs to Zelda and Gaepora, her father. Link can help find the Cat at the beginning of the game.

In Tri Force Heroes, Cats are found in various places in Hytopia. Many appear in Madame Couture's, but two are found outside, lounging on a bench and a roof, respectively. The Cat on the bench will meow when talked to without the Cheetah Costume.[12] It is to this Cat that the Beret Boy will read Volume 6 of the Drablands Diary.[13] Apparently the Cat enjoyed listening to it.[14] When Link looks in the Mirror in Madame Couture's, he can see a Cat sitting behind him near the rack of clothes. Strangely, however, it can only be seen in this Mirror, and cannot be approached. If Link wears the Cheetah Costume, he is able to understand the language of Cats.[15][16]

Cats that sit outside on the bench west of Madame Couture's will tell Link that the Street Merchant adjusts his prices whenever he is in a good mood,[17] offering double for buying Link's Materials. These Cats also emulate Madame Couture's habit of slipping into a mix of English and French. The Cat sitting on the couch facing the dressing room claims to be Madame Couture's guardian, as well as the guardian of the store owner's secrets, freely gossiping about Madame Couture's relationship with her sister, Lady Maud.[18]

Cats in The Legend of Zelda series
Community content is available under GNU Free Documentation License unless otherwise noted.
Advertisement