Zelda Wiki
Register
Don't have an account?
Sign In
Advertisement
in: Swamps, Locations, Locations in The Minish Cap 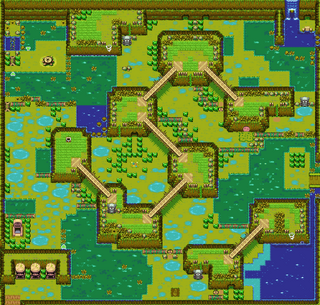 Castor Wilds is an area in The Minish Cap.[1]

Castor Wilds is a large, marshy area in western Hyrule. It connects to two other areas: the Wind Ruins to the south and the Western Wood to the east.

Marshy swamp water is a unique characteristic of the Wilds. Link will not immediately drown upon stepping into the water, but begins to sink as if in quicksand, and his foot speed significantly slows. To cross the swamps safely, Link must obtain the Pegasus Boots from Rem.

Throughout Castor Wilds, three golden Kinstones can be found, which are vital to reach the Wind Ruins, as a giant boulder blocks the way. The only way to enter the Wind Ruins is to fuse Kinstones with the Mysterious Statues in the southwestern-most part of the marsh. One Kinstone is guarded by a Darknut in a cave in the center of the marsh,[2] while another is found unprotected in a cave to the north. The third is located in a cave near the southeastern section of Castor Wilds.

In order to completely navigate the marsh, Link must find the Bow in the northwestern section of Castor Wilds. To obtain it, Link must shrink to Minish size, cross a puddle of water onto a Lily Pad and enter a small hole that contains five Mulldozers. Once they are defeated, a Chest containing the Bow will appear. The Bow is necessary to destroy the Eyegore Statues scattered across Castor Wilds.[3]

There are several Minish-sized holes throughout Castor Wilds, many of which are inaccessible until Link has fused Kinstones to create mobile platforms that can be ridden to span the gaps of marshy water. In the southern section of Castor Wilds is a Wind Crest, which can be activated and Warped to after Link has obtained the Ocarina of Wind from the Fortress of Winds.[4] There is also a Business Scrub located in the northern section of Castor Wilds who will offer to sell Link 30 Arrows for 30 Rupees.[5] The Business Scrub is also a candidate for Kinstone fusion,[6] which will clear the spiked vines in front of a tree in the Minish Woods, allowing Link to enter. Castor Wilds contains Swiftblade I's dojo, and also contains a waterfall, within which lies Scarblade, another of the Blade Brothers.

In the mid-western section of Castor Wilds, there lies a Chest guarded by an Eyegore Statue that contains a Kinstone Piece. After the Kinstone Piece is obtained, two Rupee Likes will appear. A rock wall in the northeastern section can be dug through after Link has obtained the Mole Mitts. Inside, there are two Chests containing 50 Mysterious Shells and a Kinstone Piece.