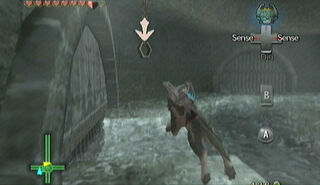 Later in Link's quest, Midna is gravely injured by Zant, and Link must once again go through the Castle Town Sewers to take the dying Midna to Princess Zelda. He enters them through a secret passageway from Telma's Bar, which leads to Jovani's House and then to the underground waterway.[4][5] Here, Link explores a new section of the Castle Town Sewers which is infested with Skulltulas as well as cobwebs that he must burn in order to proceed. This connects to the area in which Link was imprisoned near the beginning of his quest.

Once Link reaches Princess Zelda for the second time, he will be unable to return to the Castle Town Sewers again.