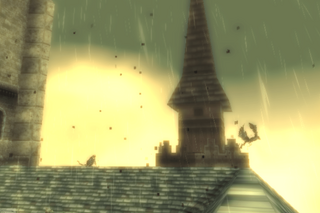 The Castle Rooftops, also known as Castle Hyrule Battlements,[1] is a location in Twilight Princess.[2] When Wolf Link first arrives here, this portion of Hyrule Castle is in a state of ruin and covered in Twilight.

After exiting the Twilit Castle Town Sewers with Midna, she takes Wolf Link across the Castle Rooftops in order to find the tower where Princess Zelda is hiding. Initially, Midna refuses to tell him where they are,[3] but upon listening to a Spirit, he learns that this is part of Hyrule Castle. Link can only jump from structure to structure with Midna's help, since there are many large gaps between broken down buildings. Here, Link first encounters Shadow Keese and Shadow Kargaroks.

Wolf Link later returns here a second time to carry the wounded Midna to Zelda. Now in the light world, Link encounters Kargaroks and Bulblin Archers. This time, the castle structures appear to have been rebuilt.[1]