It has been suggested that this article or section be merged with Hyrule Castle (Twilight Princess). 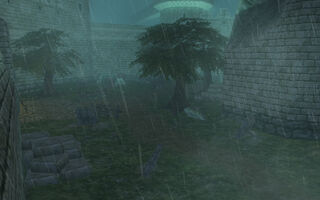 The Castle Graveyard as seen in-game

The Castle Graveyard is a location in Twilight Princess.

The graveyard is situated in the eastern section of Hyrule Castle, with its entrance only accessible by digging in a certain spot near a Triforce symbol on the ground where the small windmills are. Although at first it appears to be empty, it is actually infested with Stalfos and {{Plural|TP|Stalchild|link]]. The Castle Graveyard is an optional location of the Hyrule Castle dungeon, as the only item received here is a Small Key that allows Link to enter a door in the last floor of the castle containing ammunition such as Bombs and Arrows. The most notable landmark in the graveyard is a tombstone remarking that a "cursed sworsdman" rests beneath a "sacred tree."[1]

When Link uses his wolf senses near a tree in the middle of the graveyard, he will see several ghosts of Soldiers pointing down to a section on the ground. Bombing that section will reveal a switch, which will open a gate nearby housing various Rupees, and lighting the torch nearby will cause the rain to stop momentarily. This will give Link a chance to run over to the west gate and light two more torches to open another gate where two Owl Statues are found. The young hero must guide these statues to two small holes in the western wall using the Dominion Rod, allowing him to jump across the statues to the opposite end and reach a lever. Pulling the lever will bring up the gate containing a Treasure Chest with the Small Key in it.