Zelda Wiki
Register
Don't have an account?
Sign In
Advertisement
in: Dungeons, Mini-Dungeons, Dungeons in A Link to the Past 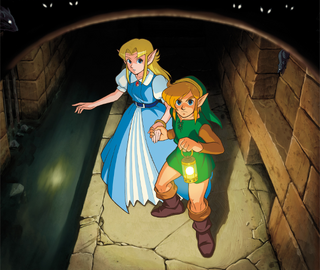 Link escorting Zelda to the Sanctuary

Castle Dungeon guide
at StrategyWiki
The Castle Dungeon,[1] also known as the Sewer Passageway,[name reference needed] is a dungeon in The Legend of Zelda series.

Entrance to the Castle Dungeon

After Link frees Princess Zelda from imprisonment in the dungeon of Hyrule Castle, which has been taken over by the betraying sorcerer, Agahnim,[2] she tells him of a way to escape safely; a secret passage in the Throne Room that leads to a Sanctuary.[3] Upon reaching the throne room, Link and Princess Zelda combine their efforts to push aside an ornamental shelf, revealing a pitch dark tunnel that was hidden behind it.[4] If Link doesn't possess a Lamp, the game will not allow the ornamental shelf to be pushed.

Entering the tunnel with Link's Lamp to light the way, it begins as a seemingly normal, yet unlit castle room, filled with Rats. Link will need to light the Torches to see the entirety of the rooms he progresses though. Running into looked Ropes, Keese and finding hidden keys for locked doors as they progress deeper until they find themselves trudging through a sewer area, located somewhere beneath the moat surrounding the castle. Navigating through this area eventually takes Link and Zelda to a well lit room with a pair of cracked walls that Link can break down later in the game with the Pegasus Shoes or Bombs to find a considerable amount of Rupees. To get back to this room later, Link must find a secret headstone in the Cemetery east of the Sanctuary.

Climbing a staircase in the room leads to a pair of rooms with wooden floorboards, the second of which contains two Levers; one is a trap, while the other opens the way to the Sanctuary.[5] If Link pulls the wrong one, Ropes fall from the ceiling. After pulling the correct switch, Link and Princess Zelda step through to be greeted by the Sage who is waiting for them in the Sanctuary.

The sewer passageway is also briefly featured in the A Link to the Past comic by Shotaro Ishinomori. After rescuing Princess Zelda from two Soldiers that were taking her away, the young hero and the princess wind up at a dead-end, but soon afterwards one of the castle walls mysteriously opens and reveals the path to the secret passage. Using a nearby Lantern, Link and Zelda advance through the passage to eventually reach the Sanctuary.

Mini-Dungeons in The Legend of Zelda series
Community content is available under GNU Free Documentation License unless otherwise noted.
Advertisement