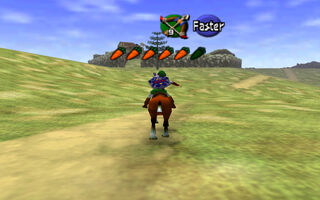 In Ocarina of Time and Majora's Mask, a meter consisting of six Carrot appears while riding a Horse. The number of remaining Carrots represents the number of times Link can whip the Horse to make it gallop.[2] Carrots successively regenerate 3 seconds after the last whipping. If all 6 Carrots are exhausted, they regenerate simultaneously after roughly 7 seconds.

In Four Swords Adventures, Carrots can be collected to increase the speed of the Links' Horses. Obtaining a Carrot without a Horse will instantly grant the Links a Horse. Carrots only appear in The Field stage and the Tingle's Tower minigame, Bucking Broncos.

In Breath of the Wild, Carrots appear in two different varieties, Swift Carrots and Endura Carrots. Uncooked Swift Carrots restore half of a heart each. When cooked into a dish, they add a "Hasty" bonus which temporarily increases Link's movement speed. Uncooked Endura Carrots restore two hearts each and when cooked into a dish, grant Link a "Enduring" bonus which gives him extra maximum Stamina. Swift Carrots look like ordinary orange Carrots, while Endura Carrots are bifurcated with a lighter orange hue. Endura Carrots will also temporarily grant Horses three extra yellow Spurs with a carrot icon next to them. These extra "Carrot" Spurs act similarly to Link's extra Stamina Wheels granted via "Enduring" dishes and Enduring Elixirs as they are lost once used and can only be used after other Spurs have been used up including those granted by the Ancient Bridle. Roasted Endura Carrots have the same effect if eaten off the ground by Horses. Horses can also eat Swift Carrots but this only increases their Bond. Additionally the Giant Horse can eat both types but Endura Carrots only increase its Bond as it has no Stars in Stamina thus no Spurs.

In Hyrule Warriors Legends, Carrots appear as Plant-type Food. They are imbued with the Lightning Element. When consumed by a Companion Fairy in the Dining Room of the My Fairy mode, Carrots can increase the Fairy's Trust level and personality traits.