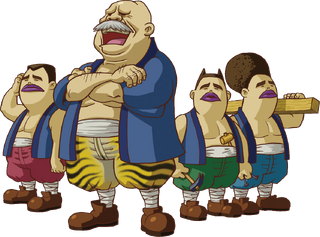 In Ocarina of Time, the Carpenters can be first seen working on a building in Kakariko Village, which later becomes the Shooting Gallery. They are hired by Impa, who hopes the village will someday become a city.[2] The Carpenters and their boss are residing at the inn run by the generous woman and can be found inside each night.

The name of the Carpenters is decided depending on the order which they are rescued. The first one is named Ichiro, the second Jiro, the third Sabooro, and the fourth Shiro.

In Majora's Mask, the Carpenters are part of the Clock Town Carnival Executive Committee, which is in charge of constructing the fireworks-viewing tower for the Carnival of Time. During the first two days, Mutoh is in the Mayor's Official Residence while the other Carpenters work in South Clock Town. During the night of the Final Day, Mutoh is the only remaining Carpenter in town, mocking the Moon above.[7] He indicates that he has some sons who have already fled the town.[8]

In Oracle of Ages, Mutoh can be found in Nuun Highlands next to the bridge leading to the Symmetry City Ruins. He and the other Carpenter were building the bridge when they decided to take a break.[11] Once Link finds the three Carpenters around the area with the help of an animal companion, they finish building the bridge.[12]

The Carpenters in The Minish Cap are first seen in North Hyrule Field, repairing damage done by Vaati, which prevents Link from entering Hyrule Town. They are later found in the Eastern Hills, blocking the path to Lon Lon Ranch. After obtaining the Fire Element from the Cave of Flames, they can be found working in a building with a waterwheel in Hyrule Town. Link can then Fuse Kinstones with them. Fusing with Bremor after finding a house for either Din, Nayru, or Farore will cause them to build a second house for another Oracle.

Ichiro, Jiro, Sabooro, and Shiro are common names to give to sons in Japan. The "-rō" part being a male ending that means "son" and "ichi" and "ji" being the numbers "one," "two," and on.[20] The German names of the Carpenters in Ocarina of Time and The Minish Cap are a reference to The Beatles, with each Carpenter sharing their name with one of the four members, John, Paul, George, and Ringo.[21] However, in Ocarina of Time 3D, the names were changed.