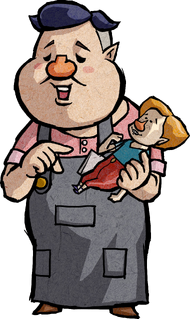 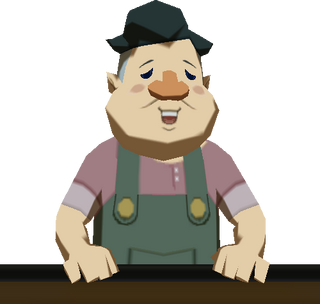 Carlov is a recurring character in The Legend of Zelda series.[1] He is a master Figurine carver.

If these requirements are met, Carlov will ask Link to wait an entire day, in which that time he will spend making a Figurine out of the subject in the Pictograph.

Carlov will even carve a Figurine of himself if a Pictograph is taken of him, although he does not quite recognize his own face; however, he does believe the person in the Pictograph is exceptionally handsome.[citation needed] According to Carlov's Figurine, it is rumored that the reason he does not let anyone watch him carve is because he does so in his underwear.[citation needed]

In The Wind Waker HD, he will work on a maximum of 12 Figurines at once as opposed to the previous limit of a single Figurine at a time. The Picto Box is also equipped with a new feature that will place a golden Carlov icon on Pictographs that meet Carlov's requirements to be turned into a Figurine. Thus Link does not have to return to the Nintendo Gallery to receive Carlov's approval.

Once the Nintendo Gallery is completed, Carlov leaves to find inspiration elsewhere, leaving Link as the Gallery's new master.

Carlov operates the Figurine Gallery in Hyrule Town in The Minish Cap, and has a younger brother named Borlov.[2] The Gallery becomes accessible after Link obtains the White Sword and infuses the Earth and Fire Elements into it. Carlov is a collector of Mysterious Shells, and will trade Figurines for them.[3] Once Link collects all 136 Figurines, Carlov rewards him with the Carlov Medal, a golden medal of his own face.[4]