Zelda Wiki
Register
Don't have an account?
Sign In
Advertisement
in: Items, Rods, Items in The Legend of Zelda TV Series 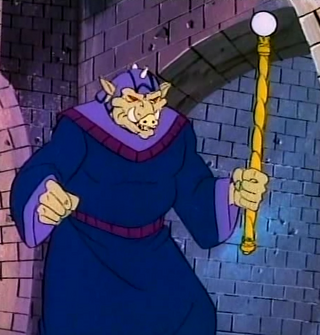 Captures its victim within an indestructible bubble

Wand of Power
The Capture Staff is an item featured in the episode "The Moblins are Revolting" of The Legend of Zelda TV series. It was created by Ganon which allows anyone captured with it to be trapped inside an indestructible bubble that only the Triforce of Power can burst.[1] After Ganon traps a Moblin inside a bubble and shows him the only way to free himself, the Moblin steals the Capture Staff and traps Ganon inside the indestructible bubble,[2] pushing him inside the Bottomless Pit to prevent him from ever touching the Triforce and bursting the bubble.[3] Although Ganon tries to free himself by using his magic to burst it, his spells deflect and hit him instead.

Shortly after Ganon is captured, a bumbling Moblin drops the Capture Staff and renders it useless.