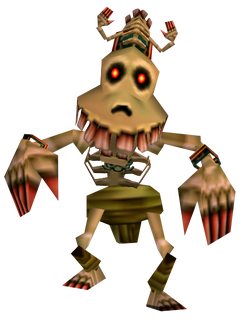 Captain Keeta is the leader of the Stalchildren who were once members of the Ikana army that defended the Ikana Kingdom during the war.[2] He was once the captain of the army under the command of Igos du Ikana, but lies restless after facing loss in battle. When Link encounters him, he is sleeping in Ikana Graveyard. After awakening him with the "Sonata of Awakening," he will challenge Link to race him and beat him in a fight.[3]

Once Captain Keeta is defeated, he will admit his defeat and give Link the Captain's Hat after a lengthy speech.[2][4] If Link fails to catch up to him before he reaches the end of the trail, Captain Keeta will refuse to fight and return to his sleep.[5]

An effective strategy is to turn into Goron Link, then roll until meeting the Stalchildren and punch them. When Link punches Keeta, the battle will start. As Zora Link, he can back up and throw his Zora Boomerangs and stun him, then use the jump attack and repeat the strategy. However, a much more effective strategy with far less steps of execution is to simply use the Gilded Sword and Bunny Hood. If Link has the upgraded Spin Attack, he will easily defeat both Stalchildren in one hit, allowing him to run swiftly to the next fire barrier.

In Hyrule Warriors, Captain Keeta appears as a new enemy type in the Majora's Mask DLC pack. He appears only in certain battles in the Termina Map. When faced in battle, after depleting 2/3rds of his health, he will request that the Warrior stops attacking him. If the Warrior continues attacking him, he will simply run away. However, if the Warrior stops, he will acknowledge their strength and then join their army.