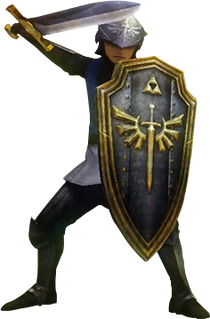 Fight to claim Keeps and combat enemy soldiers
Captains are high ranking Force soldiers in Hyrule Warriors.[name reference needed] Depending on the Force, a Captain may be an ally or an enemy.

Hylian Captains are the higher ranking soldiers of the Hyrulean Forces. As with the other soldiers, they are Hylians trained to serve the Kingdom of Hyrule in times of war. They appear in numerous battles where the Hyrulean Forces face the Dark Forces, and later Ganondorf's Forces. They also appear as enemy Captains when Ganondorf invades Hyrule Field, and as enemies to Cia and her lieutenants in the Master Quest DLC Pack Scenarios.

In "The Sheikah Tribesman", a Hylian Captain appears behind a sealed gate in the northern section of the caves, requiring reinforcements. Either Impa or Link must locate and bomb a hidden passageway to rendezvous with him.

In "Land in the Sky", the Hyrulean Forces step into the portal to the Era of the Sky, where they find the Skyloft Forces combating the Dark Forces led by Ghirahim and Volga. The Skyloft Forces are commanded by Skyloft Captains, who are otherwise identical to the Hylian Captains. The Hyrulean and Skyloft Forces both combine to drive out the Dark Forces. At the end of the battle, Ghirahim begins to brainwash and take control of a fraction of Skyloft Soldiers.[1][2] In "Sealed Ambition", Ghirahim puts his plan into place by turning the brainwashed captains into Turncoat Soldiers to attack the Hyrulean Forces. The Hyrulean Forces must defeat them and their leader before they can continue scouting for Ghirahim and the Gate of Souls in the area.

The Skyloft Forces and Skyloft Captains also appear in "The Demon Lord". They combat the advances of Ghirahim and his Forces, and later fight Cia and her Dark Forces after she breaks her false alliance with them.

As enemies, Hylian Captains have similar attack patterns to Stalmasters and Darknuts, and attack by lunging forward and swinging their sword. Their attack can be predicted by the blue light they emit when they are about to attack. Doing so leaves them vulnerable and exposes their Weak Point Gauge.

In certain Adventure Mode battles, a Hylian Captain will become injured and retreats to the Allied Base. If they are not safely escorted and are defeated, they will reappear as a named variant of the Big Poe called a Hylian Ghost. This ghost will curse the Allied Forces in numerous ways when it appears.[4][5]

Goron Captains are the higher ranking Goron soldiers of the Goron Forces. They appear as Gorons wearing plated iron armor and thick helmets. As with the rest of the Goron Forces, they are allied with and appear to the aid of the Hyrulean Forces in their fight against the Dark Forces. However, in "Land of Myth", they also appear as enemy Captains under Darunia's command.

In "The Armies of Ruin", a Goron Captain appears to the aid of the Hyrulean Forces in their battle against the Dark Forces. He is attacked by a Lizalfos, but is soon saved by Link. The rescue's efforts open the entrance to a mine tunnel, and the Goron Captain urges that Link take the Bombs inside. Later when the Hyrulean Forces summon the Great Fairy to attack the Dark Forces, one of the Goron Captain's Bombs is taken by the Fairies to turn into a giant Bomb.

In "The Dragon of the Caves" in the Master Quest DLC Pack, the Goron Forces keep guard of Wizzro's ring. The Goron Captains' panicking draws Cia's curiosity to the ring, and Wizzro is released. The Goron Captains then try to combat Cia by bringing in Bombchus while the Dark Forces are fighting Volga's Forces.

As enemies, Goron Captains attack by curling up into a ball and charging forward. The attack leaves them vulnerable shortly afterwards, and exposes their Weak Point Gauge.

Lizalfos Chieftains are high ranking Lizalfos soldiers of several Forces. They are among the Captains of the Dark Forces, Ganondorf's Forces, the Monster Forces and Volga's Forces. They also appear as ally Captains in Ganondorf's and Cia's Scenarios.

In "Ganondorf's Return", a Lizalfos leads the Monster Forces occupying the Gerudo Desert. It has the settlement gates closed to barricade Ganondorf's Forces, but later reopens them to avenge its fallen allies after several Keeps are taken. It, along with several Aeralfos, are later fought at the Sacred Grounds Keep. Their defeat summons Gohma and Manhandla onto the battlefield.

In "The Dragon of the Caves" in the Master Quest DLC Pack, a Lizalfos Chieftain and a Dinolfos Chieftain appear as Captains in Volga's army, along with several other Lizalfos and Dinolfos. They arrive as reinforcements when Cia reaches and fights Volga.