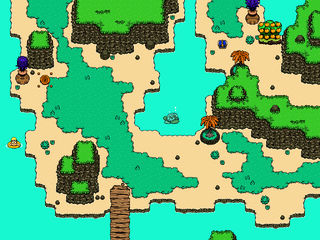 Cape Treasure is a location in Freshly-Picked Tingle's Rosy Rupeeland.[1] It is an area in the First Continent. Much like Sunshine Seashore, it is a sunny seaside area.

In this area, the Journalist is encountered for the first time. Tingle must make Simple Juice in order to revive him and get a reward. Tingle can also find a pirate weapon in a treasure chest here. He can sell it to the Armorer for Rupees.

To find the dungeon in this area Tingle must go to the skeletal Pirates. The guarding pirate will refuse to let Tingle on board, so Tingle has to find a dog (later to be named Barkle) and sell it some bones. When the guarding pirate is spoken to again the dog appears. As soon as the pirate sees it he flees on board making it possible for Tingle to enter the pirate ship.

The pirates assume Tingle wants to be a pirate and they head for their Hideaway to ask their Captain whether or not he can become one. As soon as the ship has arrived and Tingle enters the Pirate Hideaway, it becomes clear that this is the second dungeon. After completing several tasks, Tingle is allowed to meet their Captain, Captain Stalfos, who is also the boss of this dungeon.

After Tingle defeats Captain Stalfos, the pirates apologize and explain they did not really want to kill him, but just thought he would looked better with just bones. Tingle cannot become a pirate but the pirates give him the Bone Ocarina, with which he can summon the pirates (provided he is standing on a dock).

Capes in The Legend of Zelda series
Community content is available under GNU Free Documentation License unless otherwise noted.
Advertisement