"According to legend, this cap was once worn by a hero who battled the monsters of twilight. For one reason or another, it seems to smell of some beast..."
— In-game description 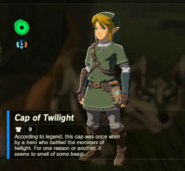 Retrieved from "https://zelda.fandom.com/wiki/Cap_of_Twilight?oldid=524060"
Community content is available under CC-BY-SA unless otherwise noted.