Zelda Wiki
Register
Don't have an account?
Sign In
Advertisement
in: Skeletal Undead, Characters, Characters in Oracle of Seasons,
and 2 more 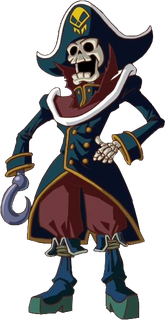 Captain of the Piratians[citation needed]

Cap'n is a recurring character in The Legend of Zelda series.[2]

Prior to the events of the Oracle games, Queen Ambi fell in love with a sea-faring man, the Cap'n, who was the leader of a band of pirates.[1] However, he set sail one day and never came back, which prompted Queen Ambi to begin a project that would guide the Cap'n home from his lost adventure: to construct an immense tower that would be tall enough so that it could see out all across the land and act as a large beacon that would guide the Cap'n to Labrynna. Unbeknown to Queen Ambi, the Cap'n originally vanished in Ambi's time because he and his crew got trapped in the Sea of Storms in the course of his exploration and could not get out.[3]

In a Linked Oracle of Seasons, the storyline brought up but never completed in Oracle of Ages of Queen Ambi's long lost lover is concluded. After clearing the Ancient Ruins, Queen Ambi will be at the Samasa Desert entrance, sent there by Nayru at the queen's request.[4] Ambi ends up meeting up again with the Cap'n, and although he says he wished he could stay,[5] Ambi interrupts him and tells him she understands why he must leave her side again: he is a seafaring man and cannot live his life on land. Before departing ways again, Ambi promises the Cap'n that she will always be waiting for his return.[6]

In Oracle of Seasons, the Piratian Ship shipwrecks in Samasa Desert, plunging the crew into Subrosia.[7] Stranded, the Cap'n and his crew take up residence in the House of Pirates. During the shipwreck, the Cap'n loses his bell.[8] He sends some members of his crew to search for it,[9] refusing to leave until it is found.[10] Once Link completes the Ancient Ruins, the Cap'n deems the young hero to be a competent adventurer and asks him to help search for the bell.[11][12] Once Link finds and fixes the bell, the Cap'n orders the crew to set sail,[13] However, they are soon overcome with seasickness, having been on land for so long.[14][15] He orders the crew to dock the ship in a bay on the Western Coast. Link can use the ship as a bridge to the Graveyard and Explorer's Crypt.[16]

In Oracle of Ages, the Cap'n appears trapped in a large ring of whirlpools within the Sea of Storms in the past,[17] accessible after the seventh dungeon. The Cap'n is able to escape the sea once Link gives him the Zora Scale he obtained recently, which is a powerful charm capable of calming the seas.[18] The Cap'n declares he and his crew are off to Holodrum.[19] Before leaving, he gives Link the Tokay Eyeball as a sign of his thanks.[20]

In the Oracle of Ages manga by Akira Himekawa, the Captain is the first shown in his cabin, after Link and Ralph have been brought aboard his ship. A Piratian asks what should be done with the two boys.[21] The Captain states they can swab the deck or man the lookout,[22] but then changes his mind and summons the two.[23] The Captain introduces himself and asks for Link and Ralph's names in turn.[24] He notices that the two look at him like he is a monster, and assures them that the pirates would not take a life without just cause.[25] Since a long time has passed, the Captain asks for news about the world.[26] Link asks the pirate how long he has been at sea.[27] The Captain responds that he does not know.[28] He had crossed the seas many times gathering knowledge and tales, but wants to speak with living, breathing people.[29] Hearing this, Link asks if the Captain knows anything about Veran.[30] The Captain says she is a sorceress who possesses people.[31] Link asks if he knows of Veran's weakness,[32] although the Captain refuses to tell unless Link answers his questions.[33] The Captain shows interest in Link's sword,[34] and says that much of a man can be told by how he cares for his equipment.[35] Swinging the sword, he tells Link that he was once a knight who had sworn loyalty to a lady.[36] The Captain spots Ralph with the Harp of Ages, and tells him to play a song.[37] Ralph begins to play, causing the Captain to remember when he danced with his lady.[38] He exclaims how they were in love and the world was theirs.[39] The Captain recounts how it ended and that he set to sea to forget, although he never did and is determined to go back and find his lover.[40] The Captain demands his crew set course for Labrynna,[41] despite the the threat of sinking.[42][43] Link finds the ship's log,[44] and both boys realize the Captain and his crew have been stuck in the storm forever.[45][46] The Captain finds the two trying to escape the ship and attacks with his crew.[47] As he duels the Captain, Link explains that, although the Captain is trapped in the storm, they can go and fix everything for him, his crew, and his lady.[48] The Captain understands Link is correct,[49] and gives them a boat.[50] The Captain gives Link a picture of Queen Ambi within a locket, and asks the hero to tell her he will love her for eternity.[51][52] Link promises to send the Captain's love to Queen Ambi.[53] When Link returns to Labrynna he gives the locket and the Captain's message to Queen Ambi.[54] She reveals the dark tower was being built so the Captain would see it and never forget her.[55] Aware of his true feelings, Ambi cancels the tower's construction.[56]