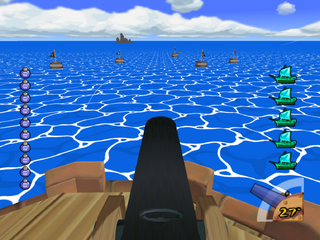 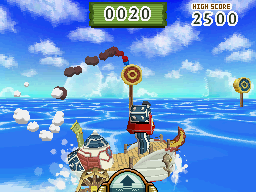 The Wind Waker
Spectacle Isle
Phantom Hourglass
Bannan Island
The Cannon Minigame is a recurring Mini-Game in The Legend of Zelda series.[1]

In The Wind Waker, the minigame is found on Spectacle Isle, where it is run by Salvatore, who also runs the Squid-Hunt mini-game on Windfall Island. The objective is to hit a series of floating barrel targets in the sea by using the cannon. Because each target is separated from the cannon to a different distance, Link has to adjust the angle of his shots, and he can determine how close he is to hitting a target by checking the projectile's landing spot. However, he must not make too many mistakes like this, since he only has 10 opportunities. If Link destroys all the targets, he will receive a Piece of Heart for the first win, Treasure Chart #17 for the second successful run, and 100 Rupees for every further win.

In Phantom Hourglass, the minigame is located on Bannan Island. Accessible after Link crosses a cave southeast from the house of the Old Wayfarer that requires the carriage and use of bombs, it can be played for 20 Rupees per game.

The objective of the Cannon Game is to shoot the red and blue targets as Linebeck steers the ship. Red targets may be shot multiple times and yield 20 points per shot. Blue targets are destroyed and yield 100 points. Precise aiming and readjustment of the ship cannon and viewing angle are necessary. A score greater than 2500 earns the young hero an upgrade for his Bomb Bag. Rupees of varying values and Ship Parts can also be won playing the Cannon Game.