This page refers to the Cannon as an object. For other uses of "Cannon," see Cannon (Disambiguation). 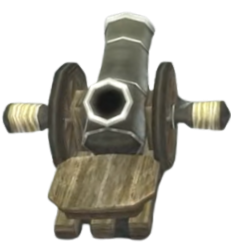 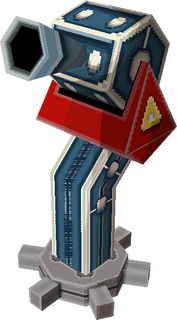 Jettisoning Bombs
Cannons are recurring Objects and Items in The Legend of Zelda series.[1][2][3][4][name reference needed] Cannons most commonly appear as either stationary weapons or as weapons that can be equipped to a vehicle, such as a boat or Train, which can then be used to fire either Bombs or cannonballs.

In A Link to the Past, Cannons are dangerous traps that appear in some locations. They are connected to the walls of certain rooms; the room containing the Big Key in the Desert Palace, and a room in the third floor of Ganon's Tower known as the Corridor of Cannons.[1] They move along the wall in a predictable back-and-forth motion, firing cannonballs at regular intervals. They are placed on either side of the room, so the cannonballs will assault Link from both directions, making it hard to pass. Link has to time his movements carefully to get beyond these traps, as they cannot be destroyed.

After Link obtains Bombs from Tetra's Ship, the King of Red Lions facilitates the use of the Cannon. The cannon has a large range for such a small boat, and is a useful item when fighting off Gyorgs, Seahats, Octoroks and other sea-based enemies. When Link's Bomb stock is depleted, the Cannon cannot be used.

Small, floating Cannons known as Air Cannons can be found in some stages in Four Swords Adventures. They are used to blast all of the four Links to higher areas, but are also present to return to the top once the Links fall through a hole in the ground. Often, there are Large Force Gems for the Links to collect in these areas.

Two Cannons can be found in the overworld which are used to transport Link between places. The first of these is Fyer's cannon, used to launch Link to Gerudo Desert, and the Sky Cannon, used to shoot him up the City in the Sky.

In Phantom Hourglass, Cannons are weapons which can be attached to the SS Linebeck. Link buys his first Cannon from Eddo's Garage for 50 Rupees, when he finds that the route to Northwestern Sea is blocked by Boulders. The Cannon has infinite ammunition and is fired by tapping the desired target with the stylus. A variety of Cannons with different appearances can be obtained in the same manner as other Ship Parts; most commonly from Shops, Treasure Chests and Mini-Games. The Cannon can also be used to get the attention of Golden Frogs by hitting them with a cannonball.

A Cannon appears in Spirit Tracks as part of the Spirit Train. This Cannon has infinite ammunition and is fired by tapping the desired target with the stylus. The first Cannon that Link acquires is the Practical Cannon, given to him by Alfonzo after the pair are attacked by Bulblins en route to the Snow Realm. There are several other varieties of Cannons that Link can acquire throughout his adventure, by trading Treasures with Linebeck III at the Trading Post.

A Cannon can be found on Fun Fun Island. This is used to launch Link up into the air and begin a minigame. Another one can be found on the boat used to navigate the Lanayru Sand Sea.

In Breath of the Wild, Cannons can be found and used around the Eldin Region around Goron City and Death Mountain. Each Cannon has a lever that causes it to rotate, allowing Link to aim it at different targets. They can be fired by placing a round Remote Bomb into it and detonating the Bomb. The young Goron Yunobo offers to act as a Cannon ball to chase the Divine Beast Vah Rudania into Death Mountain.[citation needed] With Daruk's Protection, he is able to do so without being hurt.

In Ripened Tingle's Balloon Trip of Love, there is a Cannon on Page 1 which is used to take Tingle to Page 2.

In the Phantom Hourglass manga by Akira Himekawa, Eddo decides to give Link a Cannon for free if the hero can make him feel his need.[5] Link's scream convinces Eddo, although he has to construct a new one because the scream broke all the cannons.[6][7] Once the Cannon is complete, Link first uses it to explode an attacking Octorok. The Cannon is last used to keep Bellum at bay until Link slays the monster.[8]

The pirate Jolene uses Cannons on her ship to attack the SS Linebeck.[9] These Cannons are also used on Bellum so Link can defeat him.[10]