Zelda Wiki
Register
Don't have an account?
Sign In
Advertisement
in: Gerudo, Hyruleans, Characters, Characters in Breath of the Wild 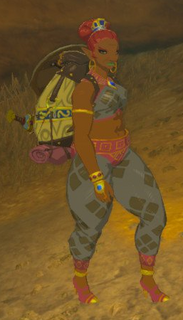 Calisa is a character in Breath of the Wild.[1][2]

Calisa is a Gerudo who travels throughout the Gerudo Region carrying a Gerudo Scimitar and a Gerudo Shield. She can be found at the Gerudo Canyon Stable and the Kara Kara Bazaar, and she also traverses the Gerudo Desert. Calisa is a legendary treasure hunter, searching for both treasure and men.[1][3][4] She has been treasure hunting for twenty year, so she is sure she can acquire any treasure she sets her eyes on.[5][6]

While at the Gerudo Canyon Stable, Calisa tells Link that she is looking for men at the Stable.[7] She says that she would not rate any of the men as treasure except for Link.[8][9] Calisa also mentions that she aims to dig up the buried Treasure Chests in the Gerudo Desert and find out what is inside them.[10] Calisa wishes that she had a Sand Seal to cross the desert with ease.[11][12][13]

Calisa also asks Link how he has such strength and endurance from his runty body.[14] She tells Link to keep an eye out for the leviathan bones in the desert as well.[15] While at the Kara Kara Bazaar, Calisa comments that the whole town has been talking about the Yiga Clan.[16]

While in the Gerudo Desert, Calisa tells Link about a rumor of a great treasure buried in the sands.[17] Calisa is also surprised that a runt like Link wants to cross the desert.[18]

If Enemies approach Calisa, she will exclaim that she could defeat the monsters if she was a few years younger.[19] If Link defeats the monsters, she rewards him with a Spicy Meat and Seafood Fry.[20]