Zelda Wiki
Register
Don't have an account?
Sign In
Advertisement
in: Countries, Link's Hometowns, Locations, Locations in The Legend of Zelda (Valiant Comics) 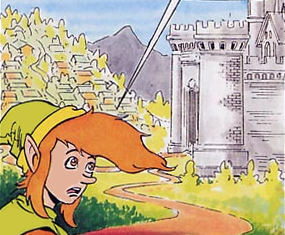 A view of Calatia from the comics

Hyrule
Calatia is a location in The Legend of Zelda comics by Valiant Comics.[1] Located west of Hyrule,[1] Calatia is the land from which Link is said to originate and also where his parents live during the events of the comic. Hylians seem to be the main population in this land, and they are led by Seline, queen of the country.[2] Because this kingdom controls many important mountain passes to Hyrule, if Calatia is ever captured by Ganon, he could easily take over Hyrule as well.[3]

Unlike Hyrule, Calatia has no dungeons, and so the only place to keep its prisoners is in a tall tower of the queen's palace.[4]

While Link is away in Hyrule, his Shadow, disguised as Queen Seline and accompanied by Thunderbird, attacks the monarch of Calatia and defeats her using her own magical powers. He then locks her away in the tower of the Calatia Palace, taking over her kingdom and making her people suffer under his rule.[5] When an unsuspecting Link returns to Calatia to visit his parents, he is violently greeted by his father, claiming that Link is not his son and ordering him to leave and never come back.[6] Confused, Link begins to travel around Calatia but receives the same mistreatment with everyone else in town,[7] and so he decides to see Queen Seline to figure out what has happened.[8] When Link goes inside the palace's throne room, he finds that his Shadow and Thunderbird have made the queen their prisoner and taken her place instead.[9][10]

Once Queen Seline explains to Link what has happened, the Shadow takes both of his prisoners and sentences them to death for committing treason against their king.[11] The queen then halts him and demands her right of a life trial since it is Calatian Law that anyone sentenced to death has the right to trial by combat to prove their innocence.[12] The Shadow accepts Seline's challenge to thus crush the people's spirits by defeating their queen again.[13] In accordance with the ancient laws, Seline chooses Link to fight in her place,[14] and Link agrees.[15] The next day, Link and his Shadow combat against one another, and after some struggle, the young hero manages to best his counterpart, saving the kingdom and the queen, as well as being declared as the Hero of Calatia by its citizens.[16]

The name Calatia bears resemblance to Galatia, a province in the Roman Empire.