Zelda Wiki
Register
Don't have an account?
Sign In
Advertisement
in: Objects, Objects in Breath of the Wild, Objects in Hyrule Warriors: Age of Calamity 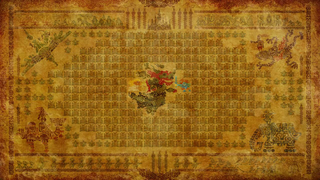 The tapestry in Breath of the Wild

Hyrule Warriors: Age of Calamity
The Calamity Ganon Tapestry is a recurring object in The Legend of Zelda series.[1][name reference needed]

The Calamity Ganon Tapestry is a scroll created by the Sheikah that depicts the events of the Era of Prosperity leading to the first Great Calamity 10,000 years prior to the events of Breath of the Wild.[2] It is split into sections depicting three primary events. The top section depicts the great prosperity that Hyrule once had.[3] Hyrule Castle can be seen at the center of the top section, flanked by Sheikah Towers which were used to detect Calamity Ganon's presence.[4] The top section also depicts ancient Sheikah with the Sheikah Slate as well as the ancient King of Hyrule surrounded by Soldiers and his worshipers.[5]

The central section of the Tapestry depicts the battle against Calamity Ganon: the Princess with the blood of the Goddess and her hero chosen by the Master Sword aided by 130 Guardian Stalkers, 61 Sheikah Monks, and four Champions piloting four Divine Beasts in repelling and sealing away Ganon.[4] The bottom portion of the Tapestry shows how following Calamity Ganon's sealing, the people of Hyrule began to fear the power of the Sheikah technology, prompting the King of Hyrule to destroy all the advancements made by the Sheikah and actively oppress them in fear of their betrayal.[6][7] As a response, the Sheikah were split into two factions: those who remained loyal to Hylia and would work to aid the Hylians by secreting their technology away in Ancient Shrines until Ganon's return, and those who rejected their ties to Hylia and the Hylians who betrayed them by taking refuge in the Gerudo Region and resolving to aid Calamity Ganon's return.[2]

The Tapestry sits inside Impa's House in Kakariko Village, where she uses it to inform Link of Hyrule's past and of Calamity Ganon's nature. The same story was preserved in song form by Kass's late teacher, who passed it down to his apprentice. Consequently, the Tapestry is seen when listening to one of Kass's Ancient Songs.