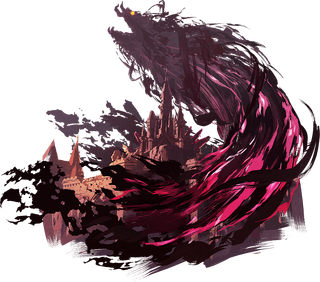 Calamity Ganon,(BotW | SSBU | HWAoC) also known as the Great King of Evil(BotW)[5] and the Calamity,(BotW)[5] is a recurring major antagonist in The Legend of Zelda series.[1]

Calamity Ganon is known as a primal evil that has appeared throughout Hyrule's history.[6][7] Ten thousand years before the events of Breath of the Wild, he appeared to ravage the world, in an event known as the Great Calamity.[8] In preparation for this, the Sheikah built a massive army of mechanical weapons called Guardians to aid the unnamed hero and princess.[9] Four massive mobile fortresses known as Divine Beasts served as the centerpieces of this army. With this collaboration between the Sheikah and the Hylians, Ganon was sealed beneath Hyrule Castle where he laid dormant for many millennia.

One hundred years prior to the events of Breath of the Wild, a prophecy warned of the return of Ganon.[10][11] Hoping to prepare in the same fashion as their ancestors, the Hyrulians began working to locate and excavate the Divine Beasts and Guardians.[12] Four Champions from each of Hyrule's races were chosen to pilot the Divine Beast of their people[13] and the restoration of the mechanical army seemed to be a phenomenal success.[14] Meanwhile, Zelda worked to awaken her sealing powers alongside a young knight, Link, who had been appointed as her protector.[15] Zelda was determined to awaken her power and prayed at the three springs of the goddess Hylia in Hyrule, but her efforts were met with failure.[16] Minutes after she had finished praying at the Spring of Wisdom, Ganon broke the seal that kept him dormant in Hyrule Castle and rose up around it.

In a move unanticipated by the Royal Family of Hyrule, Calamity Ganon managed to corrupt the entire Guardian army with his Malice and turned them against the Hyrulians.[4] Even the Divine Beasts, with their pilots slain, fell under the control of incarnations of Ganon's Malice known as the Blight Ganons.[17][18] With its strongest weapons turned against it, Hyrule was laid to ruin and Link grievously wounded, requiring him to sleep in the Shrine of Resurrection for 100 years.[19][20][21] Zelda went to confront the Ganon on her own and managed to seal it once more, though this required her to also become its prisoner to maintain the seal.[22]

Throughout Link's journey during the events of Breath of the Wild, Ganon can be seen swarming around Hyrule Castle,[22] where Zelda is using her power to keep him tethered there.[23] When Link arrives at the Sanctum of Hyrule Castle, Ganon is found hibernating within a cocoon, attempting to regenerate a physical form.[24] Link awakes Ganon from this process prematurely, confronting him in an incomplete form resembling a grotesque mixture of Ganondorf, Malice, and Guardian parts.[24] Ganon fights with a mixture of attacks used by his four incarnations of Malice.

Calamity Ganon has an influence on monsters. One hundred years ago, as Calamity Ganon's revival grew nearer, the number of monsters found throughout Hyrule increased. After Ganon's revival, monster activity became even more fierce. During the Blood Moon previously killed monsters are resurrected.[25]

Calamity Ganon appears as a Spirit in Super Smash Bros. Ultimate and has no ability.

Calamity Ganon retroactively debuts during the second Great Calamity. In an attempt to ensure that his manifestation cannot be averted, he sends a piece of himself through the time warp used by Terrako to stop it from changing the future. Soon afterward, he tries to use a possessed Guardian in an attempt to kill Zelda as she, Link, and Impa are on their way to the Royal Tech Lab.

Calamity Ganon eventually gained a more complete form after having his Harbinger Ganon form absorb Astor after the two were fought into a corner by the Champions of Hyrule. This form resembled a gigantic, Malice and Sheikah technology-fused version of his human form, albeit with a slightly piggish snout. He was also invincible in this form, forcing the Champions to their knees until Terrako, reactivated after being forced to fight the Champions due to Calamity Ganon, proceeded to intercept Calamity Ganon's attack on Zelda and self-destructed, weakening Calamity Ganon enough to ultimately seal him away.

Calamity Ganon can also be unlocked as a playable Warrior by completing Challenges pertaining to the Blight Ganons until a trio of three Challenges unlock where players must challenge the three final bosses in one-on-one confrontations. Completing the Challenge "Versus Calamity Ganon" will unlock him. His weapon is the Malice-infested Ancient Screws, as part of his form is derived from Terrako.

The playable version of Calamity Ganon is slightly smaller than the boss version, though he can still use many of the same attacks. His unique ability is to spread Malice when performing combos and certain Strong Attacks. His Unique Action will have Ganon absorb Malice back into his body, filling the Malice gauge. Filling it completely will have him enter his Calamity form, where he gains new and powerful combos. Either combo will not only stagger strong enemies and bosses but expose their Weak Point on contact. His Enhanced Ability allows him to spread even more Malice in his Calamity form with his normal combo.