"Well, my wife left me today. The last thing she said to me was: "What's more important, the Cuccos or me?!" I chose the Cuccos. - The Bow Master"
— Journal of Various Worries entry

Cado (aka The Bow Master) is a character from The Legend of Zelda: Breath of the Wild. He is a Sheikah and he can be found at Kakariko Village in the region of West Necluda.

Along with Dorian, Cado serves as one of Impa's bodyguards and helps keep Kakariko Village safe from monsters and the Yiga Clan. He wields an Eightfold Blade and Phrenic Bow which Link can take pictures of with the Camera Rune to add them to the Hyrule Compendium. He is apparently an archer as he has two Phrenic Bows mounted in his house, along with the Phrenic Bow he wields. The Phrenic Bows in his house cannot be picked up by Link, nor are they identified as such when viewed via the Camera Rune preventing Link from taking their picture for the Compendium, though they have the same model as the Phrenic Bow and presumably are just props that reinforce the idea that Cado is a Sheikah archer. He loves the Cuccos he raises and has countless drawings of Cuccos on the wall of his house.

As Impa's bodyguard, Cado takes his job seriously though is friendly with Impa's granddaughter Paya and respectful towards Link upon recognizing him as the Hylian Champion whom Impa and her trusted allies had been waiting to awaken from the Slumber of Restoration and free Princess Zelda from her burden of keeping Calamity Ganon under seal. As one of Impa's trusted allies, Cado is loyal to the Royal Family of Hyrule and its sole remaining heir Princess Zelda and thus a sworn enemy of the Yiga Clan, though Cado himself recognizes them simply as lost souls angered over the past mistreatment of the Sheikah by the Hyrulean people due to fears of ancient Sheikah technology.

Like Dorian and Impa, he smiles when Paya innocently attempts to acquire medicine from Impa to deal with "symptoms" of a perceived illness that they all recognize as her growing infatuation with Link indicating they are happy for her while finding her innocent reaction due to being unfamiliar with such feelings humorous yet both he and Dorian remain silent out of respect for the shy Paya's privacy and allow her discover it on her own.

In the Journal of Various Worries under his alias "The Bow Master", he wrote an entry in which he reveals that his wife left him when he chose his Cuccos over her, though the given the tone of his entry, he does not seem to be too upset or bothered by this. If Link buys all of Rola's Arrows and Fire Arrows she reveals her husband is the finest bowman in Kakariko Village though now only cares about his flock of Cuccos revealing herself to be Cado's estranged wife. It is implied their strained marriage and his focus on Cucco farming has caused Cado to avoid her shop thus negatively affecting her business.

After completing the side quest "Seek Out Impa" and talking to Cado at least once, Link can find Cado off duty tending to his Cucco flock from Noon to 11:00 PM. If Link talks to him, he learns that seven of his beloved Cuccos have "Flown the Coop" and he asks Link to help him retrieve his runaway Cucco which can be found in various areas in Kakariko Village. This side quest somewhat resembles Anju's Cucco collecting side quest from Ocarina of Time and may be a reference as Anju's side quest also takes place in the Ocarina of Time iteration of Kakariko Village. Once Link has returned all seven Cuccos to their pen beside Cado's house, he will reward Link with a Purple Rupee.

There is a minor glitch that causes Cado's Phrenic Bow to fail to load with the rest of his model, which causes him to at times appear without the Phrenic Bow he carries on his back. This glitch does not effect his Eightfold Blade. If his Phrenic Bow fails to load, it can be easily fixed by passing time by a Campfire, Cooking Pot, or by sleeping at the Shuteye Inn which causes Cado's model to reset. 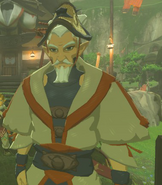 Add a photo to this gallery
Retrieved from "https://zelda.fandom.com/wiki/Cado?oldid=543158"
Community content is available under CC-BY-SA unless otherwise noted.