This page is about the character. For the boss battle, see Byrne (boss).

"I have no wish to continue the work of the spirits. Why would I want to serve the spirits... When I can become as powerful as they are?"
— Byrne

Byrne, also known as Staven (ディーゴ, Dīgo?, Dihigo), is a character from The Legend of Zelda: Spirit Tracks. One of Chancellor Cole's most powerful servants, Byrne possesses mighty strength that rivals that of the Spirits of Good; the source of his strength is his left hand, which is equipped with an armored gauntlet that strangely acts similar to the Hookshot or Clawshot. He eventually realizes the error of his ways and redeems himself.

Byrne apparently served the Spirits of Good in the past, as Anjean claims to have known him for at least a century before he turned evil. Unlike other Lokomos, Byrne possesses the average height of an adult Hylian and does not use a wheeled device to transport himself.

Not much of Byrne's early history is known. He was born a Lokomo and became apprentice to Anjean, a sage of New Hyrule and protector of the Tower of Spirits. Byrne claims he came to study with her for a chance at receiving power from the spirits he worked for. However, the Spirits of Good never gave him the power he desired, and eventually he decided to leave. As he did, Anjean had a premonition that he would soon begin to conspire with the Demon King.

When Link and Princess Zelda are traveling with Alfonzo to the Tower of Spirits, the Spirit Tracks suddenly vanish beneath their train. Byrne then appears with Chancellor Cole. Alfonzo attempts to protect Princess Zelda from the two; Byrne, however, disarms and easily defeats Alfonzo with his gauntlet and an unknown magic. Link attempts to protect Zelda, but Byrne knocks him away. After Cole separates Zelda's soul from her body, Byrne carries away her lifeless body.

Later on, when Link and Zelda find the Fire Realm's Rail Map in the Tower of Spirits, Byrne suddenly appears before them. He is about to attack them when Anjean arrives and reveals that both of them used to serve the Spirits of Good. Byrne claims that he no longer wishes to serve the Spirits when he can become equally as powerful as they are. Anjean teleports Link and Zelda to the tower's lobby before turning to face him herself.

After restoring the final sets of Spirit Tracks and returning to the tower, Link and Zelda climb to the top and encounter Byrne once again. They team up against him in battle and are victorious, and afterward, Byrne retreats to the roof of the tower, where he is scolded by Cole for not being able to defeat the children. Cole then fuses Malladus' spirit into Zelda's vacant body. Just as Link and Zelda arrive, Byrne is seen requesting the powers he wanted from Malladus; however, instead of granting him said power, Malladus blasts him with dark magic, gravely injuring him. Cole then reveals to Byrne that he was using him; Malladus would never give him the power he wanted because Byrne was once apprentice to Anjean and servant to the Spirits of Good. Malladus and Cole depart on the Demon Train.

Anjean arrives afterward and she, Link, and Zelda return to the Spirit Train's passenger car, bringing an unconscious Byrne with them solely out of pity. Anjean tells the tale of a weapon called the Bow of Light that is hidden beneath a temple in the desert; she believes it may be able to purge Zelda's body of Malladus' spirit. Before heading there, Zelda requests that the sage keep Byrne safe from harm, as she would like to "have words with him" when she reclaims her body. In an attempt at humor, she begins throwing kicks and punches in the air. Byrne, unbeknownst to all, awakens and secretly observes this.

After retrieving the Bow of Light, Link and Zelda return to the Spirit Train and discover some bad news: Malladus and Cole have hidden the Demon Train so well that Anjean cannot find it. Byrne then has a change of heart, telling them that he made a tool called the Compass of Light that he and Cole used to track down the Demon Train, where it was held in the Dark Realm. Byrne tells them that he hid the Compass far beneath the Altar of the Demon King, so that no one could ever find it. He also thanks them for sparing his life.

Link is able to retrieve the Compass and the four of them head to the Dark Realm. Prior to facing the Demon Train, Anjean offers her help to Link and Zelda, saying that it is too dangerous for the two of them alone. Byrne interferes, stating that Anjean's wounds from the battle between the two were still fresh before offering himself instead. Link and Zelda ultimately decide to handle things on their own, as they say both of the Lokomos need their rest.

After striking Malladus with an arrow from the Bow of Light, the Demon King is forced out of Zelda's body. Zelda attempts to reenter, only to discover that she cannot do so; she simply passes right through it. Just before Malladus can get to her, however, Byrne appears and projects a magical barrier around Zelda and her body, telling her that she must concentrate on reclaiming the sacred power within it, and also revealing that he overheard Zelda's comment about "having a few words" with him to motivate her. Zelda asks Tetra for a blessing and finally enters her body again. The happiness is short-lived, however; Malladus utilizes his own power and disintegrates Byrne, with the Lokomo showing some form of content that Zelda was able to reclaim her body. With immense effort, Link and Zelda destroy Malladus forever after he possesses Cole. The sky reverts to normal, and Zelda mourns for Byrne's death. Anjean then appears, revealing that Lokomos can never really die; they will instead become spirits which, after many years, are reincarnated into a new form with no memories of their past life. After piecing together the spirit of Byrne, Anjean then departs for the heavens with her 'old friend' and the other Lokomos.

Byrne's personality is very dynamic throughout the game; during the first half he seems to be obsessed with power, while in the second half he is determined to take revenge on Malladus and Cole for lying to him. He appears to be very proud and ambitious, stated by Anjean, and towards the end of the game, he shows some concern for Zelda's well-being, as she spared his life. During the game, he refers to Anjean as 'Master' despite the fact that he left her years before. Additionally, it is assumed that he could have killed her during their battle, but he did not, possibly showing he felt pity or even respect for her.

He seems to underestimate humans, as when he goes into a brief battle with Alfonzo, he states, "...But he is only human," and after losing the fight against Link and Zelda, he shows disbelief that he was beaten by "two human children".

Byrne's name is likely derived from the term "burn", as in the burning of coal. This seems probable due to the fact that many characters in Spirit Tracks are named in relation to trains.

His Japanese name, "Dihigo", is a reference to the JNR Class D51 (D go ichi). The Spanish language localization retains this reference by naming him "Diego".

His European name, "Staven", may be a reference to several things: the most likely one being a stave, which is a wooden plank used in the composition of a railroad. Staven is also the plural for the Dutch word "Staaf", which means "solid metal object"; this would be a reference to his metal gauntlet. Another possibility is stave as in a musical stave, in a reference to the Spirit Flute.

His name may reference the "staff"... a Piece of safeworking Allowing for safe use of a single line (one tracked) 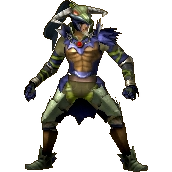 As part of the Phantom Hourglass & Spirit Tracks DLC, Volga's Standard Outfit (Grand Travels) is a Byrne Recolor. It can be obtained on the Grand Travels DLC Map.