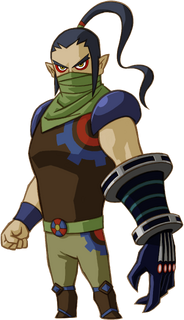 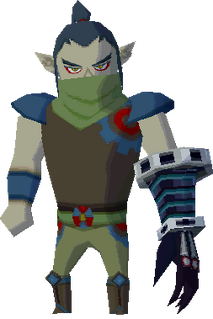 Byrne (pronounced /ˈbɜːɹn/, burn)[citation needed] is a character and antagonist in Spirit Tracks.[2] He is a servant of Chancellor Cole, as well as the boss of the final floor of the Tower of Spirits. When Link, Princess Zelda, and Alfonzo are on their way to the Tower of Spirits, they are confronted by Byrne and the Chancellor. As a result, he captures Zelda's body after her spirit was separated from her body.[3]

When Byrne was younger, he was an apprentice of Anjean, at the Tower of Spirits. He desired power, and wished that the good spirits would grant it to him. When he found that nothing he did granted the power he desired, he left. He decided to become even more powerful than the spirits, and the only being with that kind of strength was Malladus. Thus, he began working with Chancellor Cole to resurrect the ancient demon.[4][5]

When Link first meets Byrne, he ambushes the hero alongside Cole and engages in a fight with Alfonzo while the chancellor extracts Zelda's spirit from her body.[6][7] Upon Alfonzo's defeat, Byrne takes Zelda's body as he and Cole leave in the Demon Train.[8]

Link does not run into Byrne again until much later in his quest, inside the Tower of Spirits after obtaining the Fire Rail Map. Byrne confronts Link and Zelda, planning to defeat them and stop them from reforming all the Spirit Tracks.[9] Anjean intervenes, however, calling Byrne an unworthy apprentice and teleporting the children to the tower's first floor. She then confronts Byrne in battle, resulting in injuries for them both.[4][5]

After Link returns from the Fire Realm, Byrne confronts him again on the final floor of the Tower of Spirits, fighting both him and Zelda on his own.[10][11] Losing the fight, Byrne runs off to the roof of the tower, where Cole resurrects Malladus in Zelda's body. Byrne declares himself the one that freed the Demon King and demands he gives him power, but Malladus attacks Byrne, leaving him near-death.[12][13] Anjean, Link, and Zelda carry him to the Spirit Train, where Zelda asks Anjean to look after him.[14]

When Link and Zelda return after retrieving the Bow of Light from the Sand Temple, Byrne reveals that the only way to track down Malladus and Cole is to use the Compass of Light hidden beneath the altar atop the Tower of Spirits.[15] Link and Zelda manage to take it, and they travel to the Dark Realm to confront the villains. Both Byrne and Anjean offer to go with Link and Zelda to defeat Cole and Malladus, but Zelda says that they can beat them on their own.[16][17][18]

In the finale, Zelda is unable to reenter her body after Malladus has been forced out.[19] When Malladus tries to take over her body again, however, Byrne comes to the rescue and uses his power to repel Malladus which gives Zelda the strength to reclaim her body.[20] This victory is not without cost, however; as revenge, Malladus kills Byrne before taking over Cole's body instead.[21]

After Malladus has been defeated, Anjean reveals that someday, Byrne will return in a new form, without any memories of the past.[22]

Byrne will jump from pillar to pillar, which surround the arena, while he attacks Link with his clawed hand or with magical attacks such as a swipe of energy similar to the sword beam, or an orb of light. If Zelda grabs his arm, she will pull him off the pillar, and onto the floor, where he will be vulnerable for Link to attack. If Zelda is hit by the charged orb attack she will be stunned for awhile. If Zelda is hit by the clawed hand Link must hit the hand while it it attached to Zelda to free her. This combo is repeated throughout the battle, however Byrne will begin to adapt, and attack Zelda as well. Once Byrne begins to attack on the ground, he will charge up an attack, which Zelda must intercept to hold Byrne back while Link attacks him. Link can force Byrne to do the charged attack by repeatedly hitting him with his sword and force Byrne to grow angry and charge at him.

In Super Smash Bros. for Nintendo 3DS, Byrne appears as a Trophy.

In Super Smash Bros. Ultimate, Byrne appears as a Spirit with no ability.

Byrne's name, like the other members of the Lokomo tribe, is a play on a word associated with trains. In his case, his name is a pun on "burn," as in the burning of coal, which powers trains. Byrne's name is also close in spelling to the old English word "bryne" which means "fire" or "flame."