Zelda Wiki
Register
Don't have an account?
Sign In
Advertisement
in: Enemies, Common Enemies and Traps, Electricity-Related Enemies,
and 11 more

Not to be confused with ChuChu. 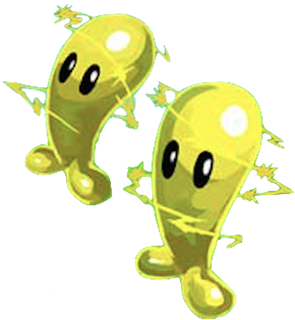 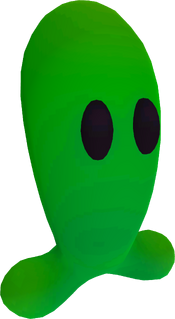 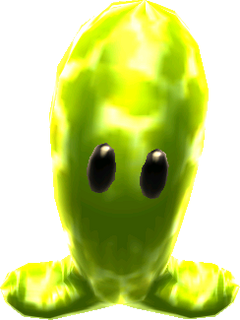 Buzz Blobs are recurring Enemies in The Legend of Zelda series.[1] They appear to be quivering piles of a jelly-like substance, whose bodies are electrified and will shock Link if they are attacked with any melee weapon, such as the Sword, hence their name. Depending on the game, it may not take any damage while electrocuting its target.

A Link Between Worlds and Tri Force Heroes introduced a non-electric variant called a Blob, which closely resembles the Buzz Blobs of previous games, while the electric Buzz Blob in those games are distinguished by their yellowish glow.

In early Zelda games, the Buzz Blob could also be transformed into a strange talking creature known as a Cukeman by sprinkling Magic Powder or using a Mystery Seed on it.

In A Link to the Past, Buzz Blobs appear in the Light World, and are common to the north-east of Hyrule where they can be found close to the Witch's Hut. They are slow moving enemies that wander aimlessly, but retaliate with an electric shock if physically attacked. Although while the body of a Buzz Blob can be charged with electricity, this seems to be an ability that requires activation. If they are stunned or frozen, they will not electrocute Link if attacked.[2] Any indirect weapons, such as Arrows shot from the Bow, are generally quite effective and will not harm Link. The Golden Sword however is able to defeat Buzz Blobs without electrocuting Link.

Buzz Blobs in A Link to the Past can be transformed into Cukeman by sprinkling Magic Powder on them.

In Link's Awakening, Buzz Blobs commonly appear in Ukuku Prairie of Koholint Island. They are the same as in A Link to the Past, as they will shock Link if attacked with his Sword. A lone Buzz Blob also appears close to the Witch's Hut in Koholint Prairie, making it a good target to test the effects of the Magic Powder received from the Witch. As in A Link to the Past, using Magic Powder on a Buzz Blob will transform it into a Cukeman. In Link's Awakening for Nintendo Switch, Buzz Blobs are surrounded by sparks of electricity.

In Link's Awakening DX, a boss known as the Giant Buzz Blob appears in the Color Dungeon.

In Oracle of Seasons, Buzz Blobs appear as uncommon enemies in Holodrum. They are common to North Horon. They are largely unchanged from their incarnation in Link's Awakening. The Buzz Blobs can be transformed into a Cukeman by using a Mystery Seed on them.

The Manhandla boss of the Ancient Ruins closely resembles a giant Buzz Blob with four flowers.

In Oracle of Ages, Buzz Blobs appear as uncommon enemies in Labrynna. They can be found in Nuun Highlands during the present. They are largely unchanged from their incarnation in Link's Awakening. The Buzz Blobs can be transformed into a Cukeman by using a Mystery Seed on them.

In Four Swords Adventures, Buzz Blobs appear in certain stages. They are mostly identical to their A Link to the Past incarnation, however some are able to leap at the Links, in a similar manner to the ChuChu.

A Link Between Worlds separates the Buzz Blob into two distinct types: the non-electrified Blob, and the glowing, electric Buzz Blob. Blobs closely resemble the green Buzz Blobs of A Link to the Past, and even inhabit the area close to the Witch's Hut as before. However they will not shock Link if attacked directly. The glowing Buzz Blobs, however, will electrocute Link if struck.

Tri Force Heroes features both Blobs and Buzz Blobs. Both enemies are common to the Levels of the Woodlands area, with Blobs being especially common. Blobs and Buzz Blobs are slightly more intelligent than their previous appearances, as instead of moving in a random pattern, they will walk towards the Links after spotting them. In certain Drablands Challenges, Buzz Blobs may replace some Blobs, if not all in a Level.

The name Buzz Blob is in reference to their characteristic "blob" shape and "buzz" electrocution attacks.[citation needed]