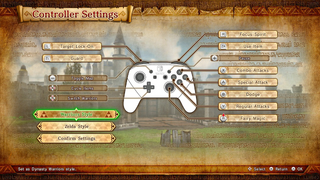 Mapping a custom layout of the Controller Buttons[1]

Multifunction Settings
The Button Settings menu is an interface in Hyrule Warriors.[2]

When playing with a singular right sided Joy-Con, the player can use the same styles used with two Joy-Cons or a Pro Controller, the Warriors style and Zelda style. Both the Zelda style and the Warriors style use the same button layout as when playing with two Joy-Cons, but the controls are rotated 90 degrees on its side to match the right Joy-Con. So for the Warriors style, B is for Regular Attacks,[23] X is for Special Attacks,[21] A is to Dodge,[22] and Y is for Combo Attacks.[24] With the Zelda style, the Y button is for Special Attacks,[25] X is to Dodge,[26] A is for Regular Attacks,[27] and B is for Combo Attacks.[28] Buttons that cannot be changed manually or between the two preset are the SL button to Guard (Ability),[29] the R stick to move,[30] pressing down the R stick to Target Lock-On,[31] the plus button to pause,[32] and the SR button to do a number of actions.[33] Above the two presets, the Multifunction Settings button appears only when using one Joy-Con which allows the player to view the controls of the SR button.[34]

Interface in The Legend of Zelda series
Community content is available under GNU Free Documentation License unless otherwise noted.
Advertisement