Zelda Wiki
Register
Don't have an account?
Sign In
Advertisement
in: Items, Masks, Masks in Majora's Mask,
and 15 more 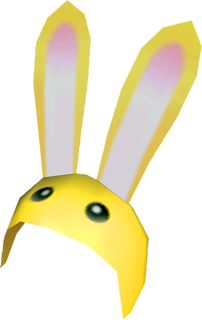 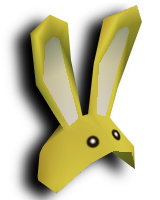 Preventing Stalchildren from appearing in Hyrule Field at night (OoT)
Granting Link more dexterity (MM)
The Bunny Hood is a recurring item and object in The Legend of Zelda series.[1]

In Ocarina of Time, the Bunny Hood is borrowed from the Happy Mask Shop as part of the Mask Trading Sequence. It can be sold to the Running Man that jogs in a set route around Lon Lon Ranch. The Running Man notices Link wearing the Bunny Hood and becomes interested in it.[2] Link can then sell him the mask for an amount of Rupees that will fill up his wallet.[3]

When worn, it prevents Stalchildren from appearing in Hyrule Field at night.

In Majora's Mask, the mask increases Link's running speed and allows him to jump farther when worn. A second, minor function of the mask is to let an on-screen timer be displayed during the Postman's "count to 10 seconds" minigame to aid Link in stopping right at 10 seconds. It is given to Link by Grog in the Cucco Shack in Romani Ranch.[4] Grog laments how he wishes he could see the Cucco chicks he watches over grow into adults, but since the Moon will be falling in three days, he no longer has the time.[5] If Link equips the Bremen Mask and begins marching around the Shack, the chicks will follow him as he walks in their proximity. If Link stops his march, all of the chicks will disband. Once Link has all 10 chicks following him, they will all turn into adult Cuccos. Grog is amazed and thanks Link by giving him the Bunny Hood.[4]

In The Wind Waker, the Bunny Hood appears alongside the Goron Mask, Keaton Mask, and All-Night Mask behind the counter of the Nintendo Gallery. It can be seen hanging on the wall next to Carlov.

The Bunny Hood also appears as an item and a Trophy in Super Smash Bros. Brawl.

In the child chapters of the Ocarina of Time manga by Akira Himekawa, Link and Princess Zelda borrow the Bunny Hood and the Mask of Truth in the Happy Mask Shop.

In Hyrule Warriors, the Bunny Hood appears as a costume for Zelda in the Majora's Mask DLC pack.

The Bunny Hood also appears as an item and a Trophy in Super Smash Bros. for Nintendo 3DS / Wii U.

The Bunny Hood also appears as an item in Super Smash Bros. Ultimate.