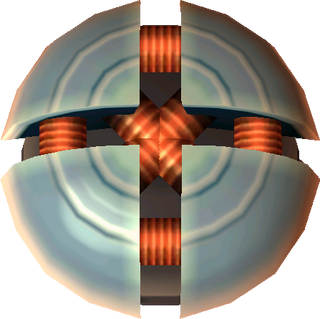 Dungeons
Caves
Bumpers are recurring traps in the The Legend of Zelda series.[1]

In their first appearance they are large static blocks that will cause Link to rebound off them violently if he comes into contact with them, similar to a bumper on a pinball table. They will not cause damage, but will often cause him to fall down holes or get knocked into Traps. They will also affect other enemies, and often appear in combination with Hardhat Beetles. While they pose a threat to Link, it is possible for Link to utilize them to cause enemies to fall into pits or even to knock enemies into spiked Traps, which can cause them damage (particularly effective against Gibdos). They cannot be destroyed, only avoided, but by using the Magic Cape he can walk straight through them. A certain cave in the Dark World requires Link to use the cape to pass a Bumper so he can obtain a Piece of Heart that someone has hidden beyond it.

In Four Swords, smaller bumper blocks appear that will drop Rupees when Link comes into contact with them. In the Anniversary Edition of the game, Mushrooms in the Lost Woods will behave in a similar manner.

In Four Swords Adventures they reappear and look and behave in a very similar manner to the ones in A Link to the Past, except now sometimes they will move and spin, making them more dangerous.

In A Link Between Worlds, Bumpers appear resembling the ones from A Link to the Past.