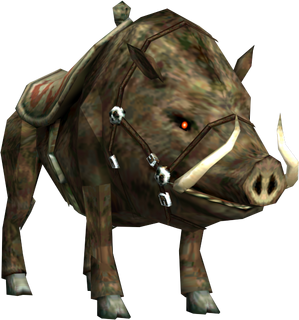 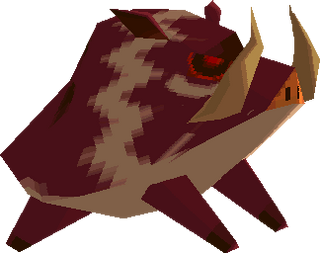 Cannon
Spirit Train Horn
Bullbos are recurring Boar-like creatures in The Legend of Zelda series.[1][name reference needed] They are frequently used as mounts by Bulblins.

Bullbos in Twilight Princess are extremely tough and can only be killed by running them off a cliff or repeatedly attacking them with a Sword. However, they are not inherently hostile, as they predominately serve as transportation for Bulblins. However, if one happens to charge at Link, he will be damaged by it. An easy way to halt them while riding Epona is to shoot them with a Bomb Arrow, which will cause them to collapse. Once provoked, they will charge forward until they tire out or collide with an obstacle, temporarily subduing them. A rider must either wait for them to calm down on their own or guide them into a solid wall.

Bullbos are usually ridden by Bulblins. There are two Bulblins to each Bullbo, a rider, and an archer. If the rider is knocked off the Bullbo, the Bullbo will begin to rampage, dislodging the remaining Bulblin from its back. After knocking the Bulblins off, Bullbos can be ridden in a similar way to Epona. However, the brutish creatures are far less intelligent than Link's Horse; they are one of the few animals that do not speak to Wolf Link when prompted. They do not appear to have the sense to stop before running into solid objects or even off cliffs. Link cannot quickly dismount them the same way he can while riding Epona, and he also cannot use items while riding them. A Bullbo's charge is different than Epona's as well; when a Bullbo is charging, it gallops so violently that Link can only cling to the reins. Charging Bullbos cannot jump and are more difficult to steer than Epona, although the charge lasts longer and is faster than Epona's. Just before sprinting, a Bullbo will rear onto its hind legs and roar similar to a Horse. When they are at top speed, they are impossible to stop, and only after a short length of time or when rammed into a wall will they halt. Finally, when sprinting, Bullbos can smash wooden fences and Bulblin towers, which are otherwise almost indestructible (Bulblin towers can also be broken with the use of the Ball and Chain). When spurred or attacked with a weapon, Bullbos will run off and eventually fall over but will get up to be ridden again. A notable Bullbo is Lord Bullbo, the massive mount of King Bulblin, who cannot be ridden by Link as normal Bullbos can.

Bullbos are also used for meat, as seen in the Gerudo Desert. A dead, cooked Bullbo can be found tied to a spit over a fire. If Link slashes the roast Bullbo, recovery Hearts will appear, and repeated attacks will cause it to burst, revealing a Piece of Heart.

Riderless Bullbos appear in areas of the Forest Realm, Snow Realm, and Fire Realm in Spirit Tracks. When encountered, they will attack the Spirit Train, attempting to destroy it. Bullbos also serve as mounts for Bulblins equipped with Bomb Arrows. Both varieties of Bullbo are easily defeated with two shots from the Spirit Train's Cannon. Wild Bullbos can be deterred with the Spirit Train's horn.

In Super Smash Bros. Ultimate, Lord Bullbo can be seen on the Bridge of Eldin Stage. King Bulblin rides Lord Bullbo across the stage, followed by a Bulblin. Sometimes, King Bulblin will drop an Bomb Barrel off of Lord Bullbo in the middle of the stage, which will blow up and make a large crater in the center of the bridge.

"Bullbo" may be a portmanteau of "bull" (referring to a large adult male mammal), and a contraction of the word "boar."