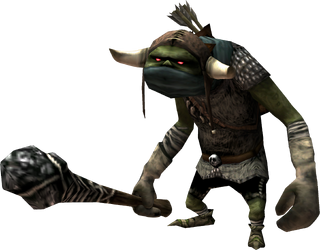 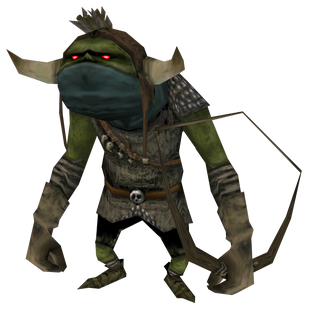 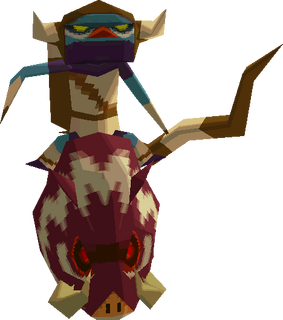 In Twilight Princess, Bulblins wield either a club or a Bow. Those with a Bow shoot either flame-ignited Arrows or Bomb Arrows. Bulblins armed with clubs also have a Quiver of Arrows on their back, indicating the possibility that all Bulblins are armed identically, but choose one or the other weapon at any given time. While on Hyrule Field, they ride Bullbos, generally in pairs. The Bulblin sitting in front controls the Bullbo, while the archer sitting at the back fires at foes. In the Twilight, they become Shadow Bulblins, which alters their appearance. They wear white masks and attack in the same way as normal Bulblins, with Arrows or clubs.

Bulblins serve their leader, King Bulblin, who in turn serves Zant. They invaded the Spirit Springs for the purpose of clearing the path for Zant's invasion of Hyrule. Eventually, Link manages to destroy their base camp in the Gerudo Desert and by the end of the game, they decide not to fight for Ganondorf and are seen in the end credits running through Hyrule Field with their King, possibly being at peace with Hyrule.

After King Bulblin is defeated, he decides to admit defeat to Link in cohesive speech, proving that Bulblins can speak Hylian, which Midna expresses surprise over.[3] He decides to form an alliance with Link, as he is on the winning side.[4] However, Bulblins in Hyrule Field and elsewhere still attack Link, despite being under a leader that joined forces with him.

In Spirit Tracks, Bulblins appear while Link is riding the Spirit Train. Their appearance is nearly identical to Twilight Princess, but differs slightly as they have a bright red nose and blue skin, as opposed to the green skin from Twilight Princess. They ride on Bullbos, and either charge Link or shoot Bomb Arrows from afar. They appear at certain locations in the Forest Realm and Snow Realm, and either attack in pairs or with another lone Bullbo.

In Super Smash Bros. Brawl, Bulblins appear on the Bridge of Eldin stage. When King Bulblin races by, a Bulblin will occasionally run after him. They can be knocked off the bridge by hitting them a few times. They also appear as a Trophy.

In Hyrule Warriors, Bulblins are a weak grunt soldiers that appear in large numbers. In Legend Mode, they appear as enemy troops in "The Sorceress of the Woods", "Land of Twilight", "The Shadow King", "A War of Spirit", "Ganondorf's Return", "Enduring Resolve", "The Dragon of the Caves", and "The Usurper King".