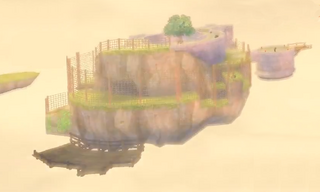 The Bug Rock is a location in Skyward Sword.[1] It is small island inside the Thunderhead, inhabited by a large number of Bugs. It is also the location of Strich's minigame called "Bug Heaven."

The Bug Rock is a small island whose main inhabitants consist of every type of bug that is found in the game. It features a wide range of habitats suitable for bugs, including a ruined puddle-filled cellar, and a wide variety of flora. The minigame in the area becomes available after Link defeats Bilocyte, freeing Levias from the parasite's control. He can visit the Bug Rock to find Strich, who says that he got lost while flying his Loftwing into a thick fog, and ended up on the island. However, Strich notes that after looking around the island, he came to the conclusion that the island was a bug paradise. The bug enthusiast informs the hero that he decided to use the island as a place to raise and catch bugs.[2]

Strich offers to release some of the bugs for Link to catch, and win as prizes in a minigame known as Bug Heaven. The game requires Link to have a Bug Net, and there are two levels that can be selected to play in the bug-catching competition. One level is the easier "Bug Beginner" and costs 20 Rupees. The harder level, "Bug Wrangler," costs 50 Rupees.[3]