Brown Cuccos are a breed of Cucco that first appeared in The Legend of Zelda: Twilight Princess. The have brown colored feathers instead of the more common white feathers.

Brown Cuccos are Cuccos with brown colored feathers. They appear in various places such as Ordon Village, Kakariko Village, and Falbi's Flight-by-Fowl.

Brown Cuccos appear in certain stages and will cause the player to lose points if shot. 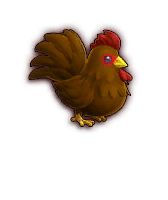 Retrieved from "https://zelda.fandom.com/wiki/Brown_Cucco?oldid=497016"
Community content is available under CC-BY-SA unless otherwise noted.