Zelda Wiki
Register
Don't have an account?
Sign In
Advertisement
in: Hylians, Hyruleans, Characters, Characters in Breath of the Wild 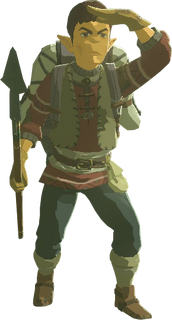 Brigo is a character in Breath of the Wild.[1]

Brigo is a Hylian who is found patrolling Proxim Bridge in West Necluda to protect it from monsters, as the bridge is an important route.[2] He wields a Traveler's Spear.

Despite being used to bad omens, Brigo feels as though they're getting worse.[3] When he notices Link, Brigo asks if they have met before.[4] Brigo says it does not matter who Link is because he is tired of talking to himself, stating that Link has come at a good time.[5] He continues by asking Link if he has seen the Towers that have popped out of the ground all over the place.[6]

Since the long deserted Ancient Shrines have also started glowing, Brigo believes the end is here.[7] Because of these events, the man is keeping his eye on "that thing", referring to the nearby Decayed Guardian, in case it starts moving.[8][9] Brigo describes the broken down Guardian as being shaped like an overturned urn.[10]

Closer to Hyrule Castle, a Guardian Stalker had chased down Brigo and shot blue beams of light to kill him, but he managed to escape into the nearby woods.[11] Brigo asks Link if he thinks his lightning fast reflexes saved him.[12] However, he laughs off the comment and says he just got lucky.[13] Since Guardians are said to still wander around Hyrule Castle, Brigo tells Link to be careful.[14]

If Link asks for directions to Kakariko Village, Brigo points to Dueling Peaks and says that on the other side there is a stable where he can ask for further directions.[15] Brigo exclaims in surprise if asked for directions to Hyrule Castle, stating that no matter how many lives Link has it is not enough to face the many Guardians there.[16] Despite this he points Link in the right direction, although he believes it would be better to view the Castle from Proxim Bridge.[17] Brigo is confused when Link asks for directions to the abandoned Great Plateau, which is surrounded by a high cliff.[18] Brigo points in the Great Plateau's direction and tells Link to be careful of monsters.[19]

Should Link go to climb or jump off the side of the bridge, Brigo will stop him and tell the hero to think about what he is doing.[20] He says Link will not change the world by jumping carelessly to his doom.[21] It would only cause Brigo himself shock at seeing such a thing.[22] Brigo ends the conversation by telling Link he is fine and not to be careless, as there are too many enjoyable things in the world to gamble with his life.[23] If spoken to after this, Brigo tells Link he almost gave him a heart attack and not to do something like that again, and offers to chat with him for a while.[24]