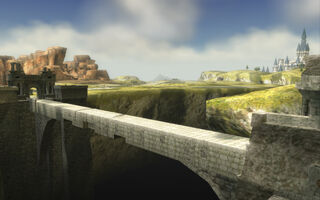 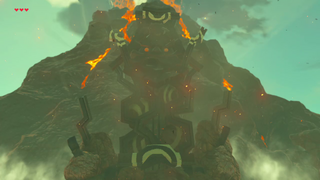 The Bridge of Eldin,(TP | BotW)[citation needed][1] also known as Eldin Bridge,(BotW)[2] is a recurring location in The Legend of Zelda series.

In Twilight Princess, the Bridge of Eldin is a bridge found north of Kakariko Village. It crosses a deep gorge where Zora's River runs through, essentially connecting the Eldin Province to a path leading to the Lanayru Province.[3] It also serves as the main access road to the Hidden Village.[3]

After King Bulblin suddenly kidnaps Colin from Kakariko Village, he makes his way to the Bridge of Eldin, with Link in pursuit. Here, the two engage in horseback combat in which Link comes out victorious and rescues Colin from the Bulblin's grasp. Once the young hero clears the Goron Mines and crosses this Bridge en route to the next province, a significant portion of the Bridge is removed by Zant's Shadow Beasts, thus blocking the path. Defeating the beasts causes a Twilight Portal to be created, but it cannot be used due to the Bridge's removal.

Link eventually finds what appears to be the removed section of the Bridge of Eldin in the western part of the Gerudo Desert, right on the Gerudo Mesa. With the aid of Midna, the young hero warps back to the area where the Bridge of Eldin was removed, taking the section with them.[4] However, if Link did not defeat the Shadow Beasts that appeared after the Bridge was removed, the portal will not appear and thus they will be unable to warp the missing section of the Bridge. Once the portal is created, Midna will place the section back where it belongs, allowing Link to cross the Bridge again.

Once Link receives the Ancient Sky Book from Shad, he will have to return to the Bridge of Eldin in order to receive a Sky Character from the Owl Statue situated in the northern section of the bridge. Moreover, by transporting the statue to the other side of the Bridge and situating it exactly below a certain ledge will allow Link to jump over and obtain a Piece of Heart.

A male Golden Phasmid can also be found in the northern portion of the Bridge of Eldin.

The Bridge is initially inaccessible as Bludo, the Gorons' Boss, has drawn the Bridge to prevent Vah Rudania from crossing over.[7] After Link saves Yunobo a second time from a pair of Black Moblins at the Bridge's Cannon, and informs him of Bludo's inability to come and use the Cannon, the two decide to attack Vah Rudania themselves so that Link can board it.[8] Yunobo uses Daruk's Protection and instructs Link to fire him at the Bridge using the Cannon to lower it.[9][10] From there on, the Bridge becomes accessible.

In Link's Crossbow Training, the Bridge of Eldin appears as a Defender Mode scenario in Level 6. Link is chased by Bokoblins, some riding on Bullbos and firing flaming arrows. Kargaroks and Bokoblins will also chase after him. Link's mission is to safely cross the Bridge.

See SmashWiki's article on Bridge of Eldin for more information.

The Bridge of Eldin is featured as a Stage in Super Smash Bros. Brawl. The Stage is totally flat, similar to Final Destination, but its ends extend beyond the left and right boundaries, making it possible to walk off the stage to a KO. Every once in a while, King Bulblin riding Lord Bullbo, randomly followed by a Bulblin, will appear crossing the stage to drop a Bomb Barrel, opening a gap in the middle of the Bridge. After a while, a Portal appears in the sky restoring the missing part of the Bridge. In the Event Match "Dark Link Duel," Dark Link is fought on this Stage. In addition, along with the Pirate Ship, it is one of two Stages where Fighters can fight any one of the characters from The Legend of Zelda franchise in Classic Mode.

The following is the music that appears in the Bridge of Eldin stage:

The following is the music that appears in the Bridge of Eldin stage: