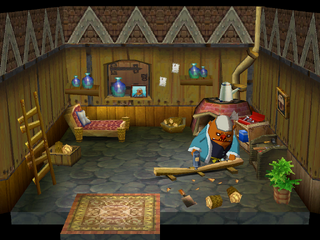 The Bridge Worker's Home is a location in Spirit Tracks.[1] It is situated in the east section of the Snow Realm.

As its name suggests, the place is the home structure of the bridge worker, Kenzo, and is the only house located in that area.

After being told by Linebeck III about a bridge worker who lives in the Snow Realm area, Link comes in search of Kenzo to repair the broken bridge that leads to the Ocean Realm.[2] Once he agrees to be taken to the Trading Post,[3] the Bridge Worker's Home will be empty since Kenzo will either remain in the Trading Post or head to the Anouki Village if Link takes him there after bringing Lumber to an Anouki who plans to add a fence.

East of the house are four Rocks that encase an area with a buried Treasure Chest. The Song of Discovery, once played, will unveil the Chest containing a Big Green Rupee, worth 100 Rupees.

A portrait of Gazpacho can be seen here.