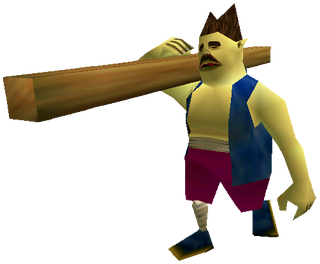 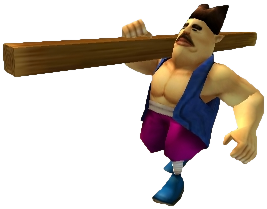 Era of the Hero of Time
Force Era

Bremor is a recurring character in The Legend of Zelda series.[1] Bremor goes unnamed in Majora's Mask.

Bremor is a Carpenter that first appears alongside the other Carpenters repairing the northern entrance to Hyrule Town after Princess Zelda is turned to stone by Vaati. The Carpenters are later found repairing an area in the Eastern Hills after Link obtains the Earth Element from Deepwood Shrine.

After Link obtains the Flippers, Bremor can be found standing next to the Post Office in Hyrule Town, where he expresses his desire to cheer up Mutoh.[2] Once Gorman has filled the blue-roofed Vacant House with a tenant, Bremor will Fuse Kinstone Pieces with Link,[3] resulting in Mutoh being inspired to build a brand-new Vacant House that can then be occupied by a second tenant.

After a successful Fusion, he will express his gratitude that Mutoh has gone back to normal.[4] After this, Bremor disappears from Hyrule Town and does not make another appearance for the remainder of the game.