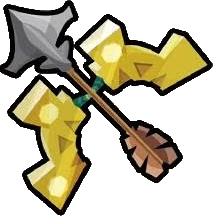 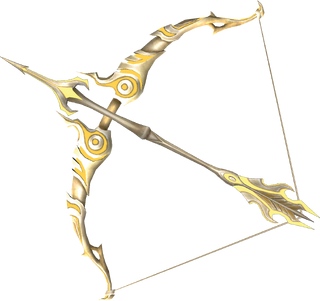 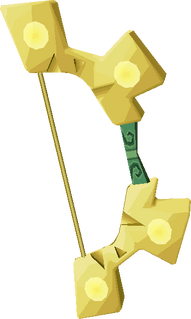 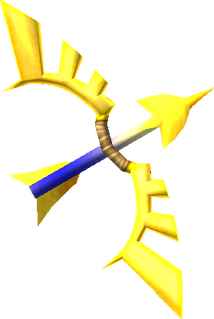 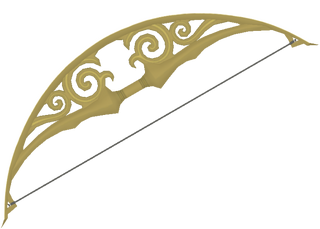 Twilight Bow
Bows of Light are recurring Items in The Legend of Zelda series.[1][2][3][note 1]

This version reappears in Breath of the Wild as the Twilight Bow. It has 30 base Attack and 100 base Durability. It is one of only 2 bows that fire Light Arrows the other of course being the BotW Bow of Light received in the final battle. Neither can fire the other arrows, and Light Arrows are generated by the bow itself, so they are infinite. This version can only be acquired when scanning the Smash series Zelda amiibo. It's randomly in the chest that drops, and can only appear if you've defeated at least 1 Divine Beast.

In the battle within the Dark Realm, Link must use the Bow of Light to shoot Malladus while Princess Zelda holds him in place, banishing Malladus' presence from Zelda's body. When Malladus takes over the body of Cole, Link must distract the Demon King long enough for Princess Zelda to shoot a weak spot on his back with the Bow of Light, eventually creating an opening for Link to destroy Malladus' two horns protecting a crystal on his head.[9] This leaves the crystal exposed, allowing Link to destroy it with the Lokomo Sword.

The Bow of Light is obtained during the fight against Yuga Ganon in A Link Between Worlds. After being successfully struck, Yuga Ganon merges into a wall, thus becoming invulnerable. At this point, Princess Zelda, speaking through her Painting, gives Link the Bow of Light. While wall merged, Link must shoot Light Arrows into Yuga Ganon's back to stun him, at which point he is forced to emerge from the wall and is left vulnerable to Sword strikes. Once this process is repeated twice more, Yuga Ganon is defeated.

The Bow of Light is given to Link by Princess Zelda before the final battle against Dark Beast Ganon in Breath of the Wild.[2] It has an attack power of 100, fires infinite Light Arrows, and has infinite durability. Once obtained, Link must wait for Princess Zelda to weaken Ganon's power, then shoot Light Arrows with the Bow of Light in the weak spots she creates. Once Ganon is sufficiently weakened, an eye representing its very core and essence will appear on its forehead. If Link shoots Ganon's core with the Bow of Light, it will destroy Ganon's physical form.

The Bow of Light used by Princess Zelda in Twilight Princess can also be unlocked as a weapon by using the Super Smash Bros. series Zelda amiibo; however, it is referred to as the Twilight Bow.

The Bow of Light appears as part of Zelda and Sheik's Final Smash in Super Smash Bros. Brawl. It also appears as a Sticker, although it is referred to as the Hero's Bow instead.

The Bow of Light appears as a weapon in Hyrule Warriors. It can be summoned as part of Zelda's combos and special attacks while wielding her Rapiers. Tetra is capable of doing the same in Hyrule Warriors Legends as her Special Attack when in Focus Spirit mode.

The Bow of Light appears once again as part of Zelda and Sheik's Final Smash in Super Smash Bros. for Nintendo 3DS / Wii U.