The bow is one of a handful of items that have been around since the original The Legend of Zelda. Using arrows as ammunition, the bow can be used to attack enemies, hit switches, and on occasion, cause special events to take place. In many of the games, Link starts with the ability to carry a limited number of arrows which can be expanded as the game progresses. Many games also feature magic-infused types of arrows. For example the Light Arrow, Ice Arrow and the Fire Arrow are the common types.

In The Legend of Zelda, the bow is found in the Eagle Labyrinth, the very first dungeon. Unfortunately, it cannot be used until the arrows are purchased from a store for 80 Rupees. Rather than employing a limited number of arrows, the game instead takes away one rupee every time an arrow is fired. The only upgrade for this bow is the Silver Arrow, found in Death Mountain Labyrinth.

In A Link to the Past, the bow returns after its absence from The Adventure of Link. It is found in the big chest of the Eastern Palace, and will be very useful for defeating the boss of the dungeon, the Armos Knights.

The bow will become available to purchase in the Mabe Village shop after the Shovel is purchased. The bow however is extremely expensive as it costs 980 Rupees, thus making this one of the most expensive items for purchase in the whole Zelda series. The bow isn't actually needed until the fifth dungeon, Catfish's Maw, or until later dungeons. Like a few common items, arrows can sometimes be found in the form of an arrow with wings in certain dungeons. By using the Roc's Feather, Link can easily acquire a few arrows by jumping into this flying object.

There is a glitch in the game which allows Link to fire bomb arrows, by equipping both the bow and a bomb and pressing their two buttons at the same time, causing a bomb to fly out. However doing so does nothing to Link's surroundings, as the bomb and arrow will simply pass by anything, including walls, and cannot harm any enemies.

Found in the Forest Temple, the Fairy Bow is needed to defeat the four Poe sisters as well as later bosses and enemies. Ocarina of Time uses the fairy bow much more often than any of the games before it but waits until later in the game to be received. Link will not receive it until he has become an adult, and only adult Link can wield it. This bow also displays the feature of being used on horseback. This is the only way to capture Big Poes and collect a new quiver at the Gerudo Archery Range.

Some believe that the Fairy Bow is the replacement for the Fairy Slingshot that only young Link can wield.

In Majora's Mask, the Hero's Bow is found in the Woodfall Temple and is again used for defeating enemies and solving puzzles. Its functions are very similar to the Fairy Bow from Ocarina of Time. It can also be used on horseback and is vital to saving Romani Ranch from Them. All of the items found in dungeons (with the exception of masks) are either the bow itself or an upgrade for the bow, such as Fire Arrows.

The bow again appears as one of the small selection of usable items in Four Swords. Unlike previous versions, the bow can now be charged up for a more powerful shot. 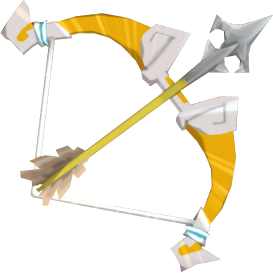 The Hero's Bow returns in The Wind Waker and can be found in the Tower of the Gods. Link receives it around the middle of the game, and uses it often for the rest of the game. During the fight with Ganondorf, Princess Zelda will borrow the Hero's Bow and help Link fight Ganondorf with Light Arrows.

In The Wind Waker, the Hero's Bow has four different modes; regular arrows, Fire Arrows, Ice Arrows, and Light Arrows which have the ability to destroy regular enemies.

Like Four Swords, Four Swords Adventures allows Link to charge up an arrow and release for a more powerful blow. If Link gives the bow to a Great Fairy to upgrade to Level 2, it will allow him to rapidly fire three arrows in a row.

The bow makes another appearance in the third "Four Swords" title: The Minish Cap. It can be found in the Castor Wilds. The Bow's ammunition is later replaced by Light Arrows, which (since Link has no Magic Meter) do not consume magic energy; they therefore have no drawback, and are completely superior to regular Arrows.

Again, the Hero's Bow makes an appearance in Twilight Princess. This time, it can be found inside the Goron Mines after defeating the Mini-Boss, Dangoro. Attachments can be placed on the Hero's Bow to allow for a new way to use it. Link can attach Bombs to make Bomb Arrows, including Water Bombs, Bomblings, and normal bombs. Link can also attach the Hawkeye so he can zoom in and out and snipe out enemies from an even further range.

The bow in Phantom Hourglass can be found in the Temple of Courage. In this game, in order to use it, a line drawn or tap to the target fires the shot. Drawing a line extends the vision range.