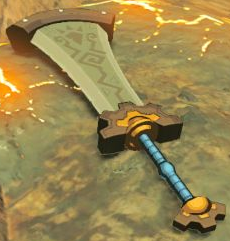 Cobble Crusher
Stone Smasher
The Boulder Breaker is a recurring Item in The Legend of Zelda series.[1][2]

The Boulder Breaker was the weapon wielded by the Goron Champion Daruk until his defeat by Fireblight Ganon.[1] It is mentioned that Daruk made swinging this weapon around look easy while others who used it would need a large portion of strength.[1] According to Bludo, Daruk used the Boulder Breaker to carve the valley at Gortram Cliff in one night.[3] He did so to make it easier for the Gorons to reach their Rock Roast.[4] In addition, there's a rumor that Daruk used to use it to fan himself.[5]

After appeasing the Divine Beast Vah Rudania, the weapon can be found in a chest in Bludo's house after speaking with him.[6][7]

The Boulder Breaker is the strongest variant of the crusher. Just like the other Goron crushers, it is a two-handed weapon that can be used for both mining and combat. It also has a hidden property which causes their damage output to be doubled when used on the ore atop a Stone Talus, as well as immediately destroying Stone Pebblits.

Despite Bludo describing the Boulder Breaker as a sharp weapon, it does not act as such and cannot cut grass or trees.

If Link loses the Boulder Breaker or the weapon breaks, he can talk to Rohan who will offer to craft him a new one in exchange for a Cobble Crusher, five pieces of Flint, and a Diamond, all free of charge.[8][9]

The Boulder Breaker is made of metal, and will therefore attract Lightning if it's equipped during a storm. It's unable to burn when exposed to Fire or a Scorching Climate. It sinks if dropped in water, but it can be picked up and manipulated using the Magnesis Rune.

Daruk is seen carrying the Boulder Breaker on his back for the most part when he isn't in battle, but he is seen using it against the monsters attacking the Goron Mines, the Yiga Clan at a small town and reacting to the presence of monsters on his way to Hyrule Castle. He also wields it against Fireblight Ganon before and after Yunobo's arrival to protect Daruk from facing an untimely demise.