Zelda Wiki
Register
Don't have an account?
Sign In
Advertisement
in: Hyrule Field, Swamps, Locations, Locations in Breath of the Wild

Not to be confused with Bottomless Bogs. 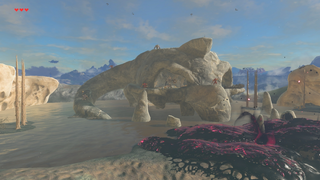 The Bottomless Swamp is a location in Breath of the Wild.[1]

The Bottomless Swamp is located in Hyrule Field, along the bank of the Hylia River. The Bottomless Swamp features a hostile landscape, with various hazards such as Bottomless Bogs, Pools of Malice, and several primitive chevaux de frise. Furthermore, several dead Trees, large skulls, and large rib bones dot the Swamp as well. In the center of the Swamp is a giant skull that serves as a monster camp, where a number of enemies patrol around it. At the southeastern reaches of the Swamp, the charred remains of a couple buildings can be found.