For the mini-dungeon in Majora's Mask, see Beneath the Well. 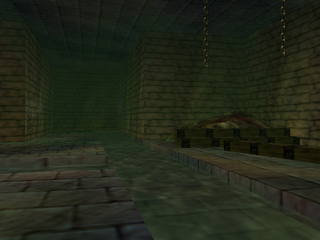 Bottom of the Well guide
at StrategyWiki
The Bottom of the Well is a mini-dungeon in Ocarina of Time.[1] It is located in Kakariko Village, more specifically at the bottom of Kakariko Well,[2] which is also known as the Well of Three Features.[3] It consists of an underground chamber that guards the Lens of Truth. On the whole, this dungeon is optional, having no effect on the main quest if not attempted. However, without the Lens of Truth, places such as the Haunted Wasteland, the Spirit Temple, the Shadow Temple, and Ganon's Castle will be more difficult to navigate. Also, Link may miss out on many treasures hidden throughout Hyrule that only the Lens of Truth can uncover.

Entrance to the Well

When Link first finds the well, it is filled with water. However, as an adult, the water has been drained and the well sealed. In order to enter the dungeon, young Link must play the "Song of Storms" to Guru-Guru to super-charge the Kakariko Windmill and drain the well dry.

According to Professor Shikashi, the house of a man who could see the truth once stood on the location of the Well.[4] This is a reference to the item found inside the dungeon, the Lens of Truth.

The Well contains many illusory walls and floors which can only be identified as fake using the Lens of Truth, as well as invisible sections of floor that can be made visible with the Lens of Truth. Deep within the Bottom of the Well, Link fights the Dead Hand, which yields the Lens of Truth upon death.

The Bottom of the Well has three floors, all treated as a basement. Only the first and largest floor must be explored in order to find the Lens of Truth. This first floor consists of a maze of tunnels with numerous side passages, as well as depressions in the floor that are filled with water. This water can be drained by playing "Zelda's Lullaby" on the Triforce emblem in one part of the central chamber, giving Link access to the rest of the first floor. The lowest floor is filled with many ReDeads and pools of poisonous water. This floor can be reached after falling into any invisible holes. The only way to climb up to the first floor again is by collecting Silver Rupees for the first time only. The second floor is the smallest, as it consists entirely of cross-sections of vertical shafts connecting the first and third floors.

In the Master Quest version of Ocarina of Time, the Lens of Truth is no longer useful in this dungeon, because all fake floors and walls are now visible to the naked eye. The reward for fighting Dead Hand is the Compass, though a Small Key is found in its room. The Lens of Truth is now found on the bottom floor, which is now full of Boulders, a Wallmaster, and five ReDeads all together. The Green Bubble is now missing, as well as the Like Like and the Beamos. The room with coffins and Gibdos is optional, too, containing only a Gold Skulltula. There are some hidden switches in the walls that unlock doors or drain the Well; playing "Zelda's Lullaby" in front of the statue unlocks some gates now. The new enemy here is a Floormaster, which just so happens to be in the same small room as a Wallmaster.