Zelda Wiki
Register
Don't have an account?
Sign In
Advertisement
in: Enemies, Slime-based Enemies, Enemies in The Adventure of Link 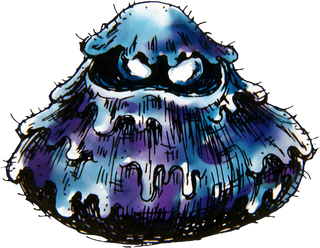 Bots are enemies in The Adventure of Link.[1] They are common blue jelly-like slime monster which can be found all across Hyrule

Unlike their red counterpart, the Bit, the Bot jumps to attack Link.[2] They have a habit of jumping up at Link just as he is about to strike, which can make them dangerous in certain situations. While weak, they are found almost everywhere and can often knock Link into lava or water. Due to how common Bots are, and the fact that they reappear when Link returns to an area, they are a great source for Magic Jars. Defeating six Bots in a row will usually cause one to drop a Magic Jar.[3] Using the Spell magic turns any regular foe into a Bot, reducing strong foes to weak slimes.

Dark blue Bots appear in the Palaces and are marginally stronger than the Overworld variety. They are just as common in the Dungeons as they are in the Overworld. Sometimes they appear as blue drips from statues at the top of pillars in Dungeons, similar to the dangerous red drops that appear. If these blue drops hit the ground, they will turn into a Bot. Link can wait near these statues and strike the Bots as they appear to obtain more Magic Jars. The Bots that appear in the Great Palace look the same, but are even stronger than they are in other Dungeons and offer more experience. Not only that, but the Boss Bot appears in this dungeon, which splits into five very strong Bots when attacked.

In the Water Town of Saria, Link can find a purple Bot sleeping in a house. If Link persists in talking to him, the Bot tells Link where Bagu, the owner of the house, can be found.[4]