This article is about the moveset. For the material, see Linkle's Boots.

"These winged boots harness the power of lightning and the fury of Cuccos to unleash powerful kicks. Use a Strong Attack to barrel through foes, with an extra attack if you hit a powerful enemy!"
— In-game description

The boots allow Linkle to harness the power of lightning in order to deliver powerful kicks and as a result it has a Lightning Elemental Attribute. She can also summon the assistance of her Cuccos to aid her during certain combos and attacks. During some of these attacks she will briefly use the Cucco to fly by holding on to it.

Its Strong Attack will cause her to dash forward and finish with a knee strike. If the knee strike hits a strong enemy such as enforcers, enemy characters, and bosses (basically any enemy that has a Weak Point Gauge) she will perform an extra attack.

When performing its Strong Attack or certain combos, Linkle starts the dash in the traditional fashion that Link does when he uses the Pegasus Boots in the canon series.

During her special attack, Linkle summons two Cuccos and together they charge forward, damaging enemies in their path.

During her Focus Spirit attack, Linkle delivers a flurry of Lightning-infused kicks.

This moveset is apparently based primarily on the Pegasus Boots, while combining design elements of the Iron Boots.

Its Level 1 weapon the Winged Boots seem to be based on the Iron Boots from the Ocarina of Time with the addition feathers that resemble the Golden Feather from The Wind Waker attached to them. Their name may as be based on an alternate name for the Boots from Zelda II: The Adventure of Link.

Its Level 2 weapon the Roc Boots seem to based on the Iron Boots from the Twilight Princess with the addition of Roc's Feathers attached to them.

Its Level 3 and Level 4 weapons represent the Pegasus Boots, however, they are depicted as thigh length boots with the addition of knee pads. 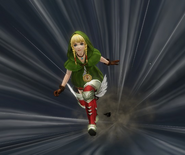 Retrieved from "https://zelda.fandom.com/wiki/Boots_(Hyrule_Warriors)?oldid=543273"
Community content is available under CC-BY-SA unless otherwise noted.